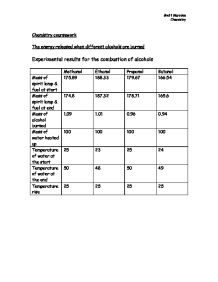 The energy released when different alcohols are burned

As the molar mass for each alcohol increased, less of it was burned. This was because the higher the mass of the alcohol, the faster bonds could be broken, as there were fewer bonds within the substance to break. It took less activation energy to break initial bonds, as the molar mass decreased. If we look at the graph we can also see that there was a considerable difference between the experimental values and he theoretical values. This was because a lot of heat energy supplied by the spirit lamp, was released into the atmosphere, instead of heating up the alcohols. This led to less mass being burned, which was had the effect of decreasing the energy released. The theoretical calculations didn't consideration that heat could be wasted and released into the environment. This agrees with my earlier prediction, and as I can observe, both the set of theoretical and experimental results prove the theory in my prediction to be correct. The results of my calculations show that there is a linear relationship between the molar mass and the energy released. ...read more.

I would have also started the experiment with each alcohol at the same temperature, as more heat causes bonds to have more energy. Using a water bath could have done this. I would have also collected the results of more alcohols, to more strongly support my findings. I would improve my investigation, by not only looking at the exothermic reaction of alcohols burning, but at other exothermic reactions. I would get more substances to test, which would enable me to get an overall picture of how molar mass effects the amount of energy produced. This would prove, without any doubts, the scientific theory I have stated in my prediction and analysis. For example, I could experiment with neutralisation reactions, to see if those exothermic reactions had the same trends. For example, I could react ammonia with sulphuric acid, nitric acid and hydrochloric acid, which all have different molar masses, to find out if the results would be the same, and support the theory put forward in this chemistry Sc1. The resources I used To aid my investigation I used the following resources for reference: * CGP chemistry revision guide * MEG study guide for triple award science * Encarta 99 (exothermic reactions) * Help sheets provided by MR Griffiths Brett Marsden Chemistry ...read more.