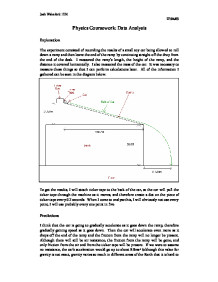 The experiment consisted of recording the results of a small toy car being allowed to roll down a ramp and then leave the end of the ramp by continuing straight off the drop from the end of the desk.

The experiment consisted of recording the results of a small toy car being allowed to roll down a ramp and then leave the end of the ramp by continuing straight off the drop from the end of the desk.  I measured the ramp’s length, the height of the ramp, and the distance it covered horizontally.  I also measured the mass of the car.  It was necessary to measure these things so that I can perform calculations later.  All of the information I gathered can be seen in the diagram below. 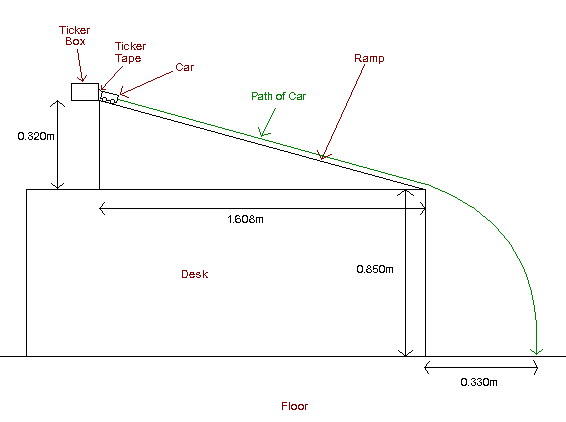 To get the results, I will attach ticker tape to the back of the car, so the car will pull the ticker tape through the machine as it moves, and therefore create a dot on the piece of ticker tape every 0.2 seconds.  When I come to analyse this, I will obviously not use every point, I will use probably every one point in five

I think that the car is going to gradually accelerate as it goes down the ramp, therefore gradually gaining speed as it goes down.  Then the car will accelerate even more as it drops off the end of the ramp and the friction from the ramp will no longer be present.  Although there will still be air resistance, the friction from the ramp will be gone, and only friction from the air and from the ticker tape will be present.  If we were to assume no resistance, the car’s acceleration would go up to about 9.8ms-2 (although this value for gravity is not exact, gravity varies so much in different areas of the Earth that it is hard to get an exact value, 9.8 is judged to be close enough).

Cumulative Distance: This is the total distance travelled so far by the car starting from t = 0 up to the present time.

Instantaneous Velocity: This is calculated by dividing the distance from the previous point by the difference in time from that point, which in this case is always 0.1 seconds.

Instantaneous Acceleration: This is the change in velocity during the previous time interval, calculated by dividing the current velocity minus the previous velocity, by the time difference between the two velocities, which again, is always 0.1 seconds.

This information is also shown in the table below.

The first area to highlight is the car.  This was the place where most of the inaccuracies were caused.  The car certainly had friction occurring in the wheels of the car, and with the surface it was going down.  However, this is one of the places where it is impossible to completely solve the problem.  We could have found a better car with better bearings in the wheels and more therefore less friction, causing less wasted energy through sound and heat.  But a frictionless car is impossible, and therefore it is impossible to completely solve this problem.

The other problem with the car was that for the experiment, it did not actually go exactly in a straight line, however, we could have solved this problem with another car.  The problem was that the wheels of the car themselves were not exactly in a straight line, and it would certainly have been possible to find a car with better wheels, and this too would have helped to get more accurate answers.

The ticker-tape raises some questions too, as I explained earlier, the ticker-tape almost certainly did not follow the path of the car as it was being dragged.  It would be much more likely that the car took a parabolic route off the end of the ramp, and the ticker-tape took a much more direct route, and although I have taken that the straight route is correct, it is hard to be sure that the ticker-tape did behave as I think it did.

To get even more accurate results, there is perhaps one more thing I could have done, I could easily have measured the dots on the ticker tape every 2, 3, or even 4 dots.  This would have made the results much easier to interpret, even if it would increase the number that I would need to plot and analyse.