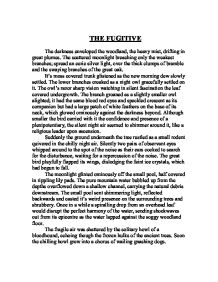 THE FUGITIVE The darkness enveloped the woodland, the heavy mist, drifting in great plumes. The scattered moonlight breaching only the weakest branches; spread an eerie silver light, over the thick clumps of bramble and the swaying branches of the great oak. It's moss covered trunk glistened as the new morning dew slowly settled. The lower branches creaked as a night owl gracefully settled on it. The owl's razor sharp vision watching in silent fascination the leaf covered undergrowth. The branch groaned as a slightly smaller owl alighted; it had the same blood red eyes and speckled crescent as its companion but had a large patch of white feathers on the base of its neck, which glowed ominously against the darkness beyond. Although smaller the bird carried with it the confidence and presence of a plenipotentiary, the silent night air seemed to shimmer around it, like a religious leader upon ascension. Suddenly the ground underneath the tree rustled as a small rodent quivered in the chilly night air. Silently two pairs of observant eyes whipped around to the spot of the noise as their ears cocked to search for the disturbance, waiting for a repercussion of the noise. ...read more.

Once again the terrifying howls erupted from the woodland, the sound seemed closer as it echoed though the statues of wood. Reverberating in every hollow and dell, until it reached the woods furthest fringes and as if finally, satisfied, suddenly dispersed into the mist. As he neared the edge of the lapping water line he felt the ground underfoot become soft and sticky. His boots left deep footprints in the sand as he cantered along, each filling up with the dark evil, water seconds after their creation. Suddenly, without warning, the sand gave way in an attempt to devour the hapless fugitive. Desperately waving his arms in a vain attempt to balance himself in the rapidly sinking sand. The tired man strained to pull his foot out of the soft, gurgling sand with little effect. Frantically reaching out his wrinkled fingers brushed against the root of a sturdy oak, two hundred years in the making. The tips of his fingers desperately fought for a grip as the ground dragged him downwards. Seizing all his meagre strength he launched himself towards the bank, minus a boot, which was hungrily swallowed up by the ravenous beast. ...read more.

A strong breeze blew the thin branches of the weeping willow over the gaping mouth of the cave as the hounds bounded tensely into the cave. Their silhouettes of shimmering silver mist, their shape and wholeness had began to disperse in the new morning light, their shape growing weaker and weaker ever minute as condensation rose from their nostrils after every subsequent breath in the raw dawn air. His eyes grew wide with terror and his arms involuntary shielded himself from the barbaric animals, through the mans outstretched and quivering arms he saw the bounding forms of the dogs, flying through the air towards him, he could see the whites of their fiery eyes and the sweat on their glistening hides. Their muscles clearly defined along their flanks, saliva glistened, hanging from the ivory teeth of the snarling, gnashing jaws. The mans trembling lips slowly formed a scream, but no sound came from the bone-dry throat, save the warm expulsion of breath. His eyes frozen wide open as his pulse quickened as blood coursed through his veins ever faster as the dogs neared, gliding through the misty air. The rush of blood quickened further, thumping through his brain, the walls of the cave blackened, the darkness drawing in. the man crumpled on the floor of the cave as the wisps of fog circled over the limp lifeless body. ...read more.