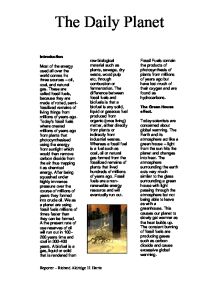 Introduction Most of the energy used all over the world comes fro three sources - oil, coal, and natural gas. These are called fossil fuels, because they are made of rotted, semi-fossilized remains of living things from millions of years ago. Today's fossil fuels where created millions of years ago from plants that photocynthesised using the energy from sunlight which would then remove carbon dioxide from the air thus trapping it as chemical energy. After being squashed under highly immense pressure over the course of millions of years they formed into crude oil. We as a planet are using fossil fuels millions of times faster than they can be formed. A the present rate of use reserves of oil will run out in 100-200 years time and coal in 300-400 years. A biofuel is a gas, liquid or solid that is rendered from raw biological material such as plants, sewage, dry waste, wood pulp etc, through combustion or fermentation. The difference between fossil fuels and biofuels is that a biofuel is any solid, liquid or gaseous fuel produced from organic (once living) matter, either directly from plants or indirectly from industrial wastes. Whereas a fossil fuel is a fuel such as coal, oil or natural gas formed from the fossilized remains of plants that lived hundreds of millions of years ago. Fossil fuels are a non-renewable energy resource and will eventually run out. ...read more.

As natural gas is a far more cleanly burning fossil fuel, far less harmful emissions are released than other fuels such as diesel. This particular fuel is fairly difficult to transport so it is regularly turned into a compressed gas or liquid state. There are almost 130, 000 natural gas vehicles on U.S roads today and over 2 million world wide. On average natural gas costs one third less than conventional gasoline at the pump. Over 50 different manufacturers produce 150 models of light, medium and heavy-duty vehicles and engines. Roughly 22 percent of all new transit bus orders are for natural gas. There are many benefits of using these natural gas vehicles. Per unit of energy, natural gas contains less carbon than any other fossil fuel, and thus produces lower carbon dioxide (CO2) emissions per vehicle mile travelled. This has many positive effects towards the greenhouse effect. Natural gas is compressed into fuel storage cylinders. Those used in Natural Gas Vehicles (NGVs) are much stronger than gasoline fuel tanks. These will of course endure a sever abuse test to ensure that they are safe and could withhold the impact of a crash that may occur. Natural gas vehicle fuel systems are sealed which prevents any spills or evaporative losses. If a leak were to occur in a natural gas fuel system then the natural gas would dissipate into the atmosphere as it lighter than air whereas petrol or diesel would just form a pool upon the floor. ...read more.

Hydrogen is a gaseous renewable resource. A method called electrolysis can be used to separate hydrogen atoms from oxygen atoms. When the hydrogen atoms are subsequently burned as fuel, they recombine with oxygen atoms and turn back into water. Process of electrolysis As hydrogen is a gaseous fuel it is far more difficult to transport. There is also no current infrastructure for transporting and distributing hydrogen although several special hydrogen fuelling station are being produced. Hydrogen currently has an excellent industrial safety record. For instance if hydrogen were to be spilled in large quantities then it would evaporate immediately this would eliminate potential disasters such as crude oil spills, or hazards on motorways when oil leaks. Methanol Methanol is a liquid alcohol fuel. It can be made from the dry distillation of wood or a range of sources including natural gas and coal (non renewable), and biomass. At the present time most of the world's methanol is produced from natural gas. Although this process has its disadvantages as it is not very cost effective. . There are no longer any methanol vehicles available to purchase Some methanol benefits include lower emissions, higher performance, and lower risk of flammability compared to that of gasoline. Methanol produces 57% amount of energy compared to diesel. Electricity Electricity is a completely unique fuel due to fact that it produces all its own energy independently whereas other fuels may need processes such as combustion. Solar energy technologies use sunlight to produce heat and electricity. ?? ?? ?? ?? The Daily Planet Reporter - Richard Aldridge 11 Harris ...read more.