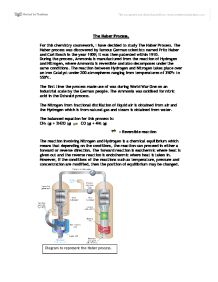 The Haber Process. For this chemistry coursework, I have decided to study The Haber Process. The Haber process was discovered by famous German scientists named Fritz Haber and Carl Bosch in the year 1909; it was then patented within 1910. During the process, Ammonia is manufactured from the reaction of Hydrogen and Nitrogen, where Ammonia is reversible and also decomposes under the same conditions. The reaction between Hydrogen and Nitrogen takes place over an Iron Catalyst under 200 atmospheres ranging from temperatures of 350�c to 550�c. The first time the process made use of was during World War One on an industrial scale by the German people. The Ammonia was oxidised for nitric acid in the Ostwald process. The Nitrogen from fractional distillation of liquid air is obtained from air and the Hydrogen which is from natural gas and steam is obtained from water. The balanced equation for this process is: CH4 (g) + 2H2O (g) CO (g) + 4H2 (g) = Reversible reaction The reaction involving Nitrogen and Hydrogen is a chemical equilibrium which means that depending on the conditions, the reaction can proceed in either a forward or reverse direction. The forward reaction is exothermic where heat is given out and the reverse reaction is endothermic where heat is taken in. ...read more.

This is an in depth report into the Haber process. Its language is sometimes confusing and hard to follow. The theory is good with a few small mistakes (these have been highlighted)