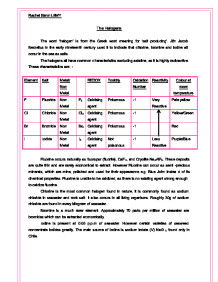 The Halogens The word 'halogen' is from the Greek word meaning for 'salt producing'. J?n Jacob Berzelius in the early nineteenth century used it to indicate that chlorine, bromine and iodine all occur in the sea as salts. The halogens all have common characteristics excluding astatine, as it is highly radioactive. These characteristics are: - Element Salt Metal/ Non Metal REDOX Toxicity Oxidation Number Reactivity Colour at room temperature F Fluoride Non Metal F2 Oxidising agent Poisonous -1 Very Reactive Pale yellow Cl Chloride Non Metal Cl2 Oxidising agent Poisonous -1 Yellow/Green Br Bromide Non Metal Br2 Oxidising agent Poisonous -1 Red I Iodide Non Metal I2 Oxidising agent Not poisonous -1 Less Reactive Purple/Blue Fluorine occurs naturally as fluorspar (fluorite), CaF2, and Cryolite Na3AlF6. These deposits are quite thin and are rarely economical to extract. However Fluorine can occur as semi-precious minerals, which are mine, polished and used for their appearance e.g. Blue John instead of its chemical properties. Fluorine is unable to be oxidized, as there is no existing agent strong enough to oxidize fluorine. ...read more.

This was discovered to be mercury poisoning. A major source of mercury was from a plant producing chlorine from brine using flowing mercury cells. The anode was made from titanium coated with ruthenium (IV) oxide and titanium (IV) oxide. This is highly resistant to corrosion by chlorine and also aids production of the gas. Sodium-mercury amalgam contains about 50% sodium hydroxide. Again the mercury is recycled and so is fed back into the cells. The move from mercury cells was made to membrane cells, which does not contain a risk of harming the surrounding population. In the membrane cells there is no net flow of liquid. Na+ ions are able to pass through the membrane whilst Cl - and OH - cannot. In this way a current can pass through the cell, this also helps to prevent contamination of the sodium hydroxide and the sodium chloride. The materials used for the membrane are synthetic polymers selected for their ability to transport cations and for their resistance to corrosive solutions and high temperatures. In 1924 an Austrian chemist named Friedrich Paneth wrote: - "The unreactivity of the noble gas elements belong to the surest of experimental results" ...read more.

After the removal of waste solid matter like fine particles of dirt: the water in the reservoir is treated with chlorine to kill any bacteria. Small amounts of chlorine remain in the water to destroy any bacteria, which may prevent recontamination the water. However halide compounds are not all good things e.g. CFCs otherwise know as Chlorofluorocarbons. This compound contains carbon, chlorine, and fluorine. These compounds cause damage to the ozone layer, which increases global warming. DDT is another example as a harmful halide, despite treating malaria, DDT remains in the environment, as they do not break down naturally. The level of these chemicals was not high - it was at a level enough to kill pests but not larger organisms. However because they are stable they have gathered in the tissues of animals within food chains. Its main effect was on their reproduction within the species, they became less fertile and offspring were less likely to survive. These particles have also made themselves into the human food chain. However some of the organisms they were originally used on some have developed a resistance to these pesticides and so are carefully regulated. Rachel Simm L6WY ...read more.