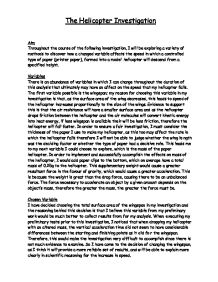 Throughout the course of the following investigation, I will be exploring a variety of methods to discover how a changed variable affects the speed in which a controlled type of paper (printer paper), formed into a model helicopter will descend from a specified height.

There is an abundance of variables in which I can change throughout the duration of this analysis that ultimately may have an affect on the speed that my helicopter falls. The first variable possible is the wingspan; my reason for choosing this variable in my investigation is that, as the surface area of the wing decreases, this leads to speed of the helicopter increases proportionally to the size of the wings. Evidence to support this is that the air resistance will have a smaller surface area and as the helicopter drops friction between the helicopter and the air molecules will convert kinetic energy into heat energy, if less wingspan is available their will be less friction, therefore the helicopter will fall faster. In order to ensure a fair investigation, I must consider the thickness of the paper I use to make my helicopter, as this too may affect the rate in which the helicopter falls therefore I will not be able to judge whether the wing length was the deciding factor or whether the type of paper had a decisive role. This leads me to my next variable I could choose to explore, which is the mass of the paper helicopter. In order to implement and successfully accomplish the effects on mass of the helicopter, I would add paper clips to the bottom, which on average have a total mass of 0.25g to the helicopter.

I was lead to believe that prior investigations were needed to be conducted, which would allow me to get an insight into what possible errors may occur in the investigation and also help me in devising a prediction and ultimately understand the type of results I would be achieving. Firstly, I began to observe and practice with different methods of constructing helicopters such as a variety of templates and also the best size for the helicopter in general. After the helicopter was successfully constructed, I changed the variables of the helicopter such as changes in the mass of the helicopter (adding more paper clips) and also changing the wingspan (shortening the wings), I realized that the greater the mass, the harder it was to record the data since in some occasions when the mass was too heavy it became too quick to calculate the data and also harder to use the stopwatch. Therefore I decided to choose to do wingspan, and I have a much larger scientific knowledge and reasoning of why the speed would increase due to a smaller wingspan.

From my results, I can

To improve upon my investigation, I would perhaps begin to introduce different variables such as different sized helicopters in general to see if they would have made an overall difference in the results or would have tried differing the size of the paper clips or the width of the wings, or even make different cuts into the wings as wind breakers, which would allow me to discover new logic behind the aerodynamics of a helicopter and how shape affects the speed. The other variable in my prior investigation, mass of the helicopter might have been a more reasonable choice since it was much less predictable and overall the outcome of this investigation was inevitable. To carry out this investigation, I would consider attaching extra mass by adding a new paper clip each time, as a I know paper clips weigh 0.25g, If I was to do the experiment ten times I would have added a total mass of 2.5g, which I think would make a considerable effect in the rate at which my helicopter would descend, but to drop this from the ceiling would not be significant enough and a much higher height would have to be used. It wouldn’t be very sensible to stand on a roof and drop this since it would be affected by other variables outside, and instead using the stairs would be a much greater idea.

To develop my current experiment for next time, I would consider dropping it from the ceiling therefore I wouldn’t have to hold the metre stick each time and it would have ended up being a much fairer trial since the height of the ceiling would never change and the metre stick might have gradually differed each time. Nevertheless, the differences would not have been drastic and would not have caused even milliseconds of difference.

In the end, I believe my investigation was very successful in what I was intending to do.