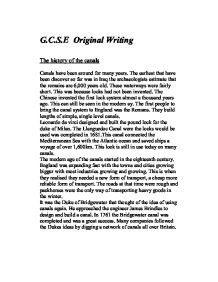 The history of the canals

G.C.S.E Original Writing The history of the canals Canals have been around for many years. The earliest that have been discover so far was in Iraq the archaeologists estimate that the remains are 6,000 years old. These waterways were fairly short. This was because locks had not been invented. The Chinese invented the first lock system almost a thousand years ago. This can still be seen in the modern ay. The first people to bring the canal system to England was the Romans. They build lengths of simple, single level canals. Leonardo da virci designed and built the pound lock for the duke of Milan. The Llanguedoc Canal were the locks would be used was completed in 1681.This canal connected the Mediterranean Sea with the Atlantic ocean and saved ships a voyage of over 1,600km. This lock is still in use today on many canals. The modern age of the canals started in the eighteenth century. England was expanding fast with the towns and cities growing bigger with most industries growing and growing. This is when they realised they needed a new form of transport, a cheap more reliable form of transport. ...read more.

so that your nose is touching the gates. This is so you do not get caught on the cill * Now you open the bottom paddles to empty the lock of water * When the lock is at the lower level and all the water has been released you can now open the gates. * Once the gates have been open you can drive the boat out of the lock and stopping on the toll path side as before * Close the bottom gates and paddles before you leave the lock. You must always make sure that all paddles and gates are in their correct places so to safe water and everyone can enjoy the waterways. Arriving at a lock which is empty i.e. the water is low * Check that the bottom gates and paddles are closed * Open the top paddles, so that it allows the water to enter the lock, so enabling the water to rise from the lower level to a higher level * Now follow the instructions from Arriving at a lock wanting to go down and the lock is full i.e. ...read more.

When the switch is in the off position remove the tubing and replace the safety cap (which is located around the neck of any gas bottle.) now take off the new gas bottle safety cap and pick up the gas intake pipe and turn the lever to the middle switch. The clamp is open so that it can be put onto the gas bottle without allowing any gas to escape. Once on the gas bottle turn the switch to the on position, this will operate the clamp so the gas pipe will not come out. This will now allow gas to go through the valve. It is now ready to use. Now we have the problem of the empty gas bottle. At the next place that sells gas you will need to get the old gas bottle out of the locker, buy a new gas bottle, and return the new bottle to the locker. I wish that it was that easy as it sounds, Normally there are a lot of things you have to remove to get to the gas bottles in the first place, then you have to try and move a 13kg bottle (which is not the lightest thing in the world) in a very small awkward place! ...read more.