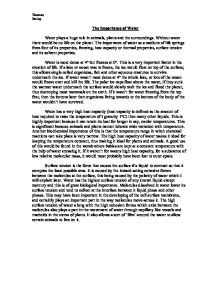 The Importance of Water.

The Importance of Water Water plays a huge role in animals, plants and the surroundings. Without water there would be no life on the planet. The importance of water as a medium of life springs from four of its properties, freezing, heat capacity or thermal properties, surface tension and its solvent properties. Water is most dense at 4� but freezes at 0�. This is a very important factor in the creation of life. If a lake or ocean was to freeze, the ice would float on top of the surface; this allows single celled organisms, fish and other aqueous creatures to survive underneath the ice. If water wasn't most dense at 4� the whole lake, or lots of the ocean would freeze over and kill the life. The polar ice caps float above the water, if they sunk the warmer water underneath the surface would slowly melt the ice and flood the planet, thus destroying most mammals on the earth. ...read more.

Surface tension is the force that causes the surface if a liquid to contract so that it occupies the least possible area. It is caused by the inward-acting cohesive forces between the molecules at the surface, this being caused by the polarity of water which I will explain later. Water has the highest surface tension of any known liquid except mercury and this is of great biological importance. Molecules dissolved in water lower its surface tension and tend to collect at the interface between it liquid phase and other phases. This may have been important in the developing of the cell surface membrane, and certainly plays an important part in the way molecules move across it. The high surface tension of water a long with the high cohesion forces which exist between the molecules also plays a part in the movement of water through capillary like vessels and tracheids in the stems of plants. ...read more.

In the crystal the sodium and chloride atoms are held together because they are strongly attracted to each other. In the presence of water this attraction is greatly reduced, with the result that the ions part company and go into solution. Water effectively weakens the attraction between ions of opposite charge because, having a positive and negative charge itself, it attracts both. Furthermore the ions are prevented from rejoining because by water molecules clustering around them. Water is therefore a good solvent because ionic solids and polar molecules readily dissolve init. This is of great biological importance because all chemical reactions that take place in cells are done so in aqueous solutions. Also the polarity of the molecule also plays another significant role. The negative charge of the hydrogen has an attraction with the positive charge of the oxygen from different molecules, this is known as weak-hydrogen-bonding. This has great significant in the shape of biological molecules such as enzymes and proteins. Without this polarity they would not be able to form complex 3d structures such as hemoglobin. Thomas Bailey ...read more.