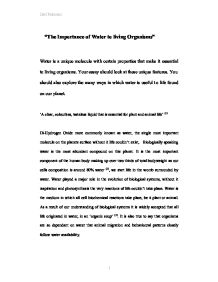 "The Importance of Water to living Organisms" Water is a unique molecule with certain properties that make it essential to living organisms. Your essay should look at these unique features. You should also explore the many ways in which water is useful to life found on our planet. 'A clear, colourless, tasteless liquid that is essential for plant and animal life' (1) Di-Hydrogen Oxide more commonly known as water, the single most important molecule on the planets surface without it life couldn't exist, Biologically speaking water is the most abundant compound on this planet. It is the most important component of the human body making up over two thirds of total bodyweight as our cells composition is around 80% water (2), we start life in the womb surrounded by water. Water played a major role in the evolution of biological systems, without it respiration and photosynthesis the very reactions of life couldn't take place. Water is the medium in which all cell biochemical reactions take place, be it plant or animal. As a result of our understanding of biological systems it is widely accepted that all life originated in water, in an 'organic soup' (2). It is also true to say that organisms are so dependant on water that animal migration and behavioural patterns closely follow water availability. The reason why water is important as a medium for life is mainly attributed to its wealth on the planets surface and from the five properties it exhibits here: Solvent properties, heat capacity, surface tension, freezing properties and transparency (2). ...read more.

The last property of water found on the surface of the earth is its transparency this is greatly important as small photosynthesising organisms within the water would not be able to live and as most of these organisms are the primary producers in ocean food chains the great ecosystems within would not exist. This means that there would be no life on this planet, as it was stated earlier that life came from the seas. Further benefits to the transparency of water are that a lot of aquatic animals hunt by sight. Water is used by all life on this planet for the purpose of this essay two organisms will be explained, plants and animals. Plants are known as autotrophic which means they produce there own food (1); they produce this by a process known as photosynthesis. Photosynthesis is the reaction by which green plants make complex organic molecules from carbon dioxide and water, to power this process plants use the suns energy which is absorbed by a green pigment called chlorophyll (5). The overall equation for photosynthesis is: Water + Carbon Dioxide � Glucose + Oxygen During photosynthesis water is split using light energy to produce hydrogen ions. These ions are used to reduce the Carbon Dioxide to form a carbohydrate. Water is also used in plants as support, this is achieved by a central large vacuole in the centre of the cell which when turgid keeps pressure in the cell this prevents the plant from wilting. ...read more.

The physical environment in which animals exist is also controlled by water. For organisms, annual rainfall is very important as are its pH and predictability; organisms living in very dry places have adapted special devices to reduce water loss. Examples of such mechanisms to prevent water loss can be found for example the Australian desert frog which retains urine in its bladder for use in the dry season, it retains so much urine that it swells up like a balloon, aborigines use these animals as a source of water (2). Plants also show adaptations for example Marram grass where the leaves are folded up into a spine like structure, as a result all the stoma are on the inside therefore reducing the amount of water lost due to transpiration (3). Other examples of adaptations can be seen in cacti where water is stored in thick stems and branches. In addition the epidermis is surrounded by a thick cuticle and very few stomata to reduce transpiration. For aquatic organisms the temperature, salinity and nutrient content of the water are essential. As well as Oxygen saturation, wave action and the rate of current flow is important. All the above factors govern the type of organism found in each area. In conclusion it is clear to see water is a unique molecule unlike any other found on this planet and due to its many characteristics and properties it is essential to living organisms. Without water there would be no life on this planet, the diversity of life found on this planet is controlled by water availability. ...read more.

This is an interesting account of the importance of water to living organisms and focuses first on the main properties of water molecules before going on to look at examples of how organisms interact with water in their different habitats. In this respect, the essay takes a different approach to this topic from usual, especially in the second half. Some examination boards might prefer the standard property/biological significance essay but it's good to read a version which tries to steer away from this rather over-used formula.

The essay's only major weakness was its lack of appropriate punctuation and capital letters marking the end of one sentence and the start of the next. The scientific content, however, is well researched and fully engages the reader.