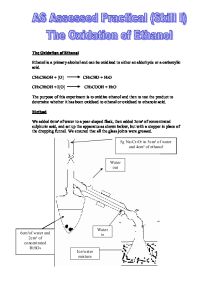 The Oxidation of Ethanol.

The Oxidation of Ethanol Ethanol is a primary alcohol and can be oxidized to either an alderhyde or a carboxylic acid. CH3CH2OH + [O] CH3CHO + H2O CH3CH2OH + 2[O] CH3COOH + H2O The purpose of this experiment is to oxidize ethanol and then to test the product to determine whether it has been oxidised to ethanal or oxidised to ethanoic acid. Method We added 6cm� of water to a pear-shaped flask, then added 2cm� of concentrated sulphuric acid, and set up the apparatus as shown below, but with a stopper in place of the dropping funnel. We ensured that all the glass joints were greased. We then had to make up a solution containing 5g of sodium dichromate in 5cm� of water and add 4cm� of ethanol. We had tom pour this mixture into the dropping funnel. We heated the acid in the pear-shaped flask until it was almost boiling and then turned off the bunsen burner. We then had to carefully remove the stopper and put the dropping funnel into the correct position, as shown in the diagram. ...read more.

It is also dangerous with oxidising agents as uncontrollable reactions take place. To prepare for these hazards we needed to keep the solution away from the bunsen flame and wear goggles in case any "uncontrollable reactions" happened. The sodium dichromate we used was very toxic and could cause cancer by inhalation and was harmful if swallowed or if contacted with skin sensitisation could occur. Ulceration also could have occurred on damaged skin. It is also dangerous with combustible materials as it forms explosive or vigorously burning mixtures. To prepare for this hazard we needed to be careful not to spill any and to wear lab coats and goggles. Sulphuric acid that we used is very corrosive and can cause severe burns. It is dangerous with sodium as dangerous reactions could take place and also water as vigorous reactions occur when the concentrated acid is diluted. To prepare for this hazard we needed to again make sure we wore lab coats and goggles to protect our eyes, skin and clothing. ...read more.

To distillate we collected was a clear solution. The two tests we did with the distillate were to add the distillate to universal indicator. This turned the solution bright red. This therefore showed an acid was present. So according to this test we had produces ethanoic acid. The second test was to add sodium carbonate to the distillate. This showed a slight fizzing which also shows the distillate is an acid. Conclusion After doing the experiment my results show that a carboxylic acid has been formed. I have come to this conclusion as after doing both tests with this distillate my results show an acid has been formed. It was an oxidation reaction of a primary alcohol and with this reaction either an alderhyde or carboxylic acid can be formed. The carboxylic acid will have been formed as there would have been an excess of dichromate. The equation for this reaction is: CH3CH2OH + 2[O] CH3COOH + H2O I have made my decision as a carboxylic acid as two tests have shown this and test 1 with the universal indicator proved it was an acid by changing from colourless to red and test 2 showed fizzing which is also the sign of an acid being formed. ...read more.