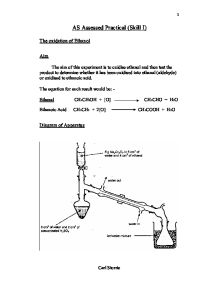 The oxidation of Ethanol.

AS Assessed Practical (Skill I) The oxidation of Ethanol Aim The aim of this experiment is to oxidise ethanol and then test the product to determine whether it has been oxidised into ethanal (aldehyde) or oxidised to ethanoic acid. The equation for each result would be: - Ethanal CH3CH2OH + [O] CH3CHO = H2O Ethanoic Acid CH3CH2 + 2[O] CH3COOH + H2O Diagram of Apparatus Method 1. To 6cm� of water in the pear-shaped flask, add 2cm� of concentrated sulphuric acid, and set up the apparatus as shown below, but with a stopper in place of the dropping funnel. Ensure that all the glass joints are greased. 2. Make up a solution containing 5g of sodium dichromate in 5cm � of water, add 4cm� of ethanol and pour the mixture into the dropping funnel. 3. Warm the acid in the pear shaped flask with a low flame until it is almost boiling and turn off the Bunsen burner. 4. Carefully remove the stopper and put the dropping funnel in position, as shown in the diagram. 5. ...read more.

polymerisation reaction May occur Ethanoic Acid - Corrosive � Severe Burns � Flammable above 40�C � Vapour irritating to the respiratory system Sodium Carbonate - Irritant to � Eyes � Skin � Respiratory System Sodium Dichromate - Very Toxic � Cause cancer if inhaled � Harmful if swallowed � Harmful if in contact with skin � Ulceration may occur on damaged skin - Sensitisation by skin contact Danger to environment - Very to toxic to aquatic environment may Cause long-term adverse effects Sulphuric Acid - Very corrosive - cause severe burns Dangerous with � Sodium - dangerous reactions can take place � Water - Vigorous reaction when the Concentrated acid is diluted. Universal Indicator - When in the context of this experiment universal indicator has no relevant hazard's. Observations During the course of the experiment I wrote down a few observations including smells, colours, effervescence etc. Below are the observations for the experiment in the order of observing them. ...read more.

Conclusion Therefore to conclude my experiment I can deduce from my results that oxidising ethanol produces ethanoic acid. This was proven from my two tests. Another test was advised but lack of the proper equipment and chemicals prevented this. Instead it was replaced with the sodium carbonate test. The sodium carbonate test proves that the ethanol was oxidised into ethanoic acid because when added to the distillate effervescence occurred. This would only have occurred if the distillate were ethanoic acid. If it were ethanal then it would not have fizzed. The equation for this is- 2CH3COOH + Na2C03 2CH3COO� Na+ + C02 + H2O Effervescence The universal indicator test also proves that the distillate is an acid. This is because when added to the distillate it turns a bright red, which means it is a 1 on the pH scale. This would not have happened if ethanal was the distillate. The colour change during the experiment was due to the redox reaction-taking place. The orange dichromate ion (Cr2 O7� �) was reduced to a green chromium (???) ion (Cr�+). 1 Carl Storrie ...read more.