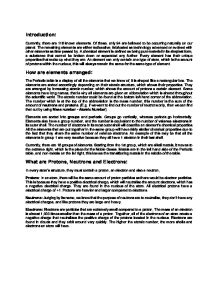 Introduction: Currently, there are 118 known elements. Of these, only 94 are believed to be occurring naturally on our planet. The remaining elements are either radioactive, fabricated as technology advanced or evolved with other elements as time passed by. A chemical element is defined as being pure material in its simplest form, a substance that cannot be broken down or separated any further. Every element has their unique properties that make up what they are. An element can only contain one type of atom, which is the amount of protons within the nucleus, this will always remain the same for the same type of element. ...read more.

If we want to find out the number of neutrons only, then we can find that out by using Mass number - Atomic Number). Elements are sorted into groups and periods. Groups go vertically, whereas periods go horizontally. Elements also have a group number, and the number is equivalent to the number of valence electrons in its outer shell. The number of electrons in its most outer shell will describe an element's chemical properties. All the elements that are put together in the same group will have fairly similar chemical properties due to the fact that they share the same number of valence electrons. ...read more.

They are found in the nucleus of the atom. All electrical protons have a electrical charge of +1. Protons are heavier and larger compared to electrons. Neutrons: Judging by its name, we know that the purpose of neutrons are to neutralise, they don't have any electrical charges, and like protons they are large and heavy. Electrons: Electrons are particles that are extremely small compared to a proton, The mass of an electron is almost 1,000 times smaller than the mass of a proton. Together, all of the electrons of an atom create a negative charge that neutralises the positive charge of the protons located in the nucleus. Electrons are found in clouds and they orbit around very quickly. The higher the atomic number, the more shells and electrons an atom will have. ...read more.

The student answers the question well with the information given being accurate and relative to the subject. The response is explicit with everything a student at GCSE would need to learn about the periodic table.

The student answers the question well with the information given being accurate and relative to the subject. The response is explicit with everything a student at GCSE would need to learn about the periodic table.

The introduction gives a brief and concise overview, which includes a definition of what an element is which is key to understanding the rest of the essay. This is a transferable skill that you can use anywhere, which is explaining any key words that you use, it shows whoever is marking it that you have an in depth knowledge of the subject. The way the essay has been set out allows for very easy reading, as you do not have to go 'looking' for the points that could be worth marks. The language used for example 'valence electrons' is a high level term that is not commonly used until A-level. Maybe some of the terms used could have been better explained as it would had added to what is already a brilliant essay.

The fact that key words are in bold type is a very good skill to employ in any subject as it makes marks easy to find. The bibliography at the end of the essay is a good way for teacher/examiners to see where you got your information, to improve this a small evaluation of each source that includes comments on reliability, could be a good idea. Overall this is a very good essay because of the layout and use of key terms.