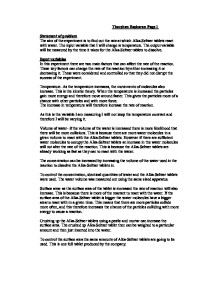 The rate at which Alka-Seltzer tablets react with water.

And a chemical reaction takes place. Below is the chemical equation for the reaction: 3NaHCO3 + C6O7H6 ? Na3C6O7H + 3CO2 + H2O Below is the word equation for the reaction: Sodium bicarbonate + Citric acid ? Sodium citrate + Carbon dioxide + water Tharshan Baskaran Page 8 Hypothesis As the temperature is raised, the rate of the reaction will increase. However, as the temperature increases the general trend of the graph would be broken. This is because the calcium hydrogen carbonates which causes hardness in water is dissolving and making the water softer. I would also expect the experiment to proceed fastest at the highest temperature (in this experiment- 70oC) and slowest at the lowest temperature (in this experiment- room temperature). Tharshan Baskaran Page 9 Predictions As the temperature increases the movement of molecules also increases as they gain more energy. This theory is based upon the kinetic theory. This also means that the rate at which the particles collide also increase. As more particles are colliding in a given time and also as the particles have more energy they collide with more force producing a reaction breaking the activation energy level. Some of the particles colliding will not break this activation energy barrier and so will not produce a reaction. The higher the temperature is the higher the rate of reaction. I expect the reaction to occur fastest at around 60oC or 70oC. However, after this increase in temperature I do not expect there to be an increase in the rate of reaction. This is because around this time the molecules would be reacting as fast as they can already. I would expect the graph for Time against temperature to like this: The reason why the graph curves at the end is due to the fact about hardness in water. As the temperature is increased I expect the calcium hydrogen carbonate in water to dissolve. ...read more.

This is because the water inside the water bath can be set to a particular temperature, and the water would stay to that temperature. When using a beaker to heat the water, the temperature could always change in that it could increase in temperature if heated more, or decrease in temperature, if not heated. As you can see form the results and the graph there was an anomalous result. This could have been caused for many reasons the main being human error. Below are points of what could have one wrong: * If the amount of water was not measured correctly it would change the overall result. This is because too much water would cause an increase in the rate of reaction, and too less water would cause as slower reaction. To ensure more accuracy over this a burette could be used as mentioned above. * If the Alka-Seltzer tablet was not put into the beaker at the correct temperature there would be inaccuracies in the overall result, and if the final temperature at the end of the experiment was not measured properly, it would have caused even more inaccuracies. This is because at a particular temperature the rate of reaction would be different from what it should be. To solve this problem a thermostatic water bath could be used as stated above. * If the stop watch was stopped to early or late, again the overall reading would not be as accurate as it could have been. * It was almost impossible to tell when the Alka-Seltzer tablet had dissolved, each time the experiment was done. This was a huge problem for the experiment as this could have totally caused problems to the experiment. A special type of detector apparatus, which bleeped when the correct amount of Alka-Seltzer tablet dissolved, could improve this, each time the experiment was done. This would give us an extra measure of accuracy each time. Another way to improve the experiment and to produce consistent readings was to used distilled water. This is because the distilled water contains no impurities and therefore no hardness in water. ...read more.