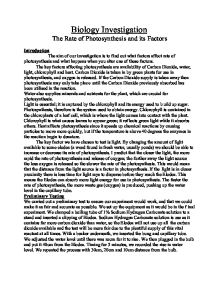 The Rate of Photosynthesis and its Factors

Biology Investigation The Rate of Photosynthesis and its Factors Introduction The aim of our investigation is to find out what factors affect rate of photosynthesis and what happens when you alter one of these factors. The key factors affecting photosynthesis are availability of Carbon Dioxide, water, light, chlorophyll and heat. Carbon Dioxide is taken in by green plants for use in photosynthesis, and oxygen is released. If the Carbon Dioxide supply is taken away then photosynthesis may only take place until the Carbon Dioxide previously absorbed has been utilised in the reaction. Water also supplies minerals and nutrients for the plant, which are crucial for photosynthesis. Light is essential; it is captured by the chlorophyll and its energy used to build up sugar. Photosynthesis, therefore is the system used to obtain energy. Chlorophyll is contained in the chloroplasts of a leaf cell, which is where the light comes into contact with the plant. Chlorophyll is what causes leaves to appear green; it reflects green light while it absorbs others. Heat affects photosynthesis since it speeds up chemical reactions by causing particles to move more quickly, but if the temperature is above 40 degrees the enzymes in the reaction begin to denature. ...read more.

The fairness of the test also contributes to the accuracy of the experiment and its results. So to keep the test fair we will keep all key factors other than light constant throughout. We will use 1% solution of Sodium Hydrogen Carbonate for the whole experiment, which will provide the Elodea with more than enough Carbon Dioxide for its photosynthesis. I will not alter the heat, the room temperature is unlikely to change much, if at all, while the experiment takes place. Since the same piece of Elodea is being used throughout the amount of chlorophyll present in the reaction will not alter. The solution in which the Elodea is submerged will not be changed at any point in the experiment. It will not be added to or have any removed. These key factors must remain the same so that it is only the differences in light we are testing, and nothing else will be affecting our results. There are few safety issues with our experiment, since we are not handling any harmful substances. Our only precaution are to handle our equipment with care and to ensure we don't let the hot bulb come into contact with any liquids as this may cause the bulb to explode. ...read more.

We purposely turned our experiment away from the light of the window, and as the copious amounts of oxygen released by our colleagues' Elodea suggests, this appears to have an effect. Had we either used a larger piece of Elodea or collected the oxygen for a longer period of time we would have had a greater rise in the water level of the capillary tube, which would have been less difficult to measure. In hindsight we should have allowed a fixed amount of time for the Elodea to acclimatise to each new distance from the light source before we began measuring. We, however, just left it for a while until we thought it had adjusted. Another factor which needs to be considered is the complexity of biological systems, and the numerous factors which affect them. Our results were reliable enough to form the conclusion that light affects photosynthesis, and that as the distance from the light source increases the rate of photosynthesis decreases. However, the results were not good enough to say by how much with any certainty. We would need to do a lot of further experiments to prove the direct relationship between rate of photosynthesis and the distance from the light source. We also should consider that we've only used one plant species to test our prediction. We would need to experiment with other species to develop a more accurate result. ...read more.