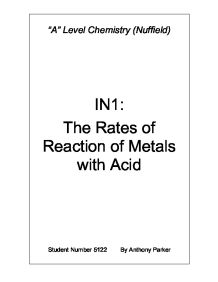 The Rates of Reaction of Metals with Acid.

"A" Level Chemistry (Nuffield) IN1: The Rates of Reaction of Metals with Acid Student Number 5122 By Anthony Parker Introduction I plan to study and experiment on two different aspects of chemical kinetics. These include. * Activation energy. Activation energy is the amount of energy; it takes for a known substance to collide (collision theory) with another and react to form product(s). * Order of reaction. By the meaning of 'order of reaction', we mean what the rate of the reaction is. We study this because there are several factors that can affect the rate of a reaction. These include concentration/pressure, temperature or the presence of a catalyst. * What is an acid? The definition of a strong acid is an acid that almost fully ionises (donates its proton/hydrogen atom) in water, a weak acid is an acid that only partially ionises (donates its proton/hydrogen atom) in water. Activation Energy. Reactions can only happen when the reactants particles collide, but most collisions are not successful in forming product molecules. The reactant molecules must collide with enough energy to break the original bonds so that new bonds in the product molecules can be formed. At a particular temperature the energy of each individual molecule are distributed according to the Boltzmann's distribution. There would then, theoretically, be a set number of molecules with more than the activation energy at any given temperature and therefore the reaction should occur at any temperature. However, this reaction is too slow to be measured and there are many factors that affect this rate of reaction. These include concentration. If the concentration of any reactant in a solution is increased, the rate of reaction is increased. Increasing the concentration increases the probability of a collision between reactant particles because there are more of them in the same volume or area. Increasing the concentration of an acid molecule increases the frequency at which they hit the surface of a reactant to dissolve them. ...read more.

3) Take a magnesium strip and place in a conical flask quickly inserting the tube from the syringe and press start on the stopwatch. 4) Once 40cm3 has been reached, press stop on the stopwatch and record the time. 5) Repeat the experiment with the other acids 6) Repeat whole experiment for two sets of results for each acid. The end point will be the time it takes to produce 30cm3 of gas Results Hydrochloric acid Concentration (moles) Reaction 1(sec) Reaction 2(sec) Average(sec) 1 28.63 27.21 27.92 4 3.29 4.71 4.00 Sulphuric acid Concentration (moles) Reaction 1(sec) Reaction 2(sec Average(sec) 1 23.72 24.57 24.15 4 2.56 2.63 2.60 Evaluation Unfortunately, due to the nature of equipment pressure could only build to produce 35cm3 of gas. Another reason for the lack of gas in the gas syringe, is the amount of tubing that was used to connect the conical flask to the gas syringe. The tubing was 3 millimetres diameter, and 200 millimetres long. It could also be due to the lack of an airtight seal, somewhere on the apparatus. This will not change my overall result though. This is because the reduced volume will not change throughout the experiment. The method of investigation and it will use 30cm3 as the measured volume to time. As you can see from the results, even at this point the sulphuric acid has a faster reaction time than hydrochloric acid. This reaction went reasonable well and with the changes I have made it will be suitable for investigation. Experiment one. Hypothesis * The effect of a basic acid has no relevance to the activation energy. Method Apparatus: - 1 Water Bath 3 50 cm3 Conical flasks 2 Thermometers with 0.5?C increments 3 Stopwatches 1 Bottle of distilled water 3 50 cm3 Measuring cylinders 63 Pieces of 30mm magnesium ribbon 1050cm3 of 2 mole H2SO4 1050cm3 of 2 mole HCl 1050cm3 of 2 mole H3PO4 Cotton wool 1) ...read more.

Errors in the concentration of the standard solution. A 3-figure balance was used to measure the amount of magnesium to be used in a standard flask, but as there were draughts in the lab it was usually only possible to measure the mass to within �0.01g. The 50cm3 standard flask that was used had a specified error of �1 ml at 20oC. Other possible errors may occur which affect the concentration, for instance, the beaker in which the solution was made up may contain impurities despite repeated rinsing with distilled water, and the magnesium may not have been adequately rinsed out of the beaker before the standard flask is filled with distilled water. The total quantifiable error in the concentration is the 1% resulting from the errors in mass (assuming a typical mass of 1.0g) and the 0.4% resulting from uncertainties in the volume, and therefore has a total possible error of 1.4%. However, at times new batches of standard solution had to be brought in during an experiment and this could explain why some of the points deviate from the line of best fit by a fair amount. Errors in starting and stopping the timer. As mentioned above, the human reaction time is about 0.5s. The average time for a run of catalysed experiment is around 20s, therefore the percentage error is 2.5%, and all the times should be treated as �0.25s. Other sources of random errors. The errors listed above all have a random nature, and it is therefore impossible to remove the error by adding a 'correction factor'. Even after a correction factor is added, there would still be other sources of random errors such as operator errors and differences of room temperature across the 4-week period. It can be clearly seen from the acid concentration graph that there is an indirect proportionality between acid concentration and rate, so therefore hydrochloric acid is almost a first order reagent. The same graph shows a negative curved relationship and therefore is second order. ...read more.