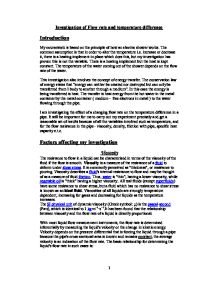 The relationship between flow rate and temperature difference

Investigation of Flow rate and temperature difference Introduction My coursework is based on the principle of how an electric shower works. The common assumption is that in order to alter the temperature i.e. increase or decrease it, there is a heating implement in place which does this, but my investigation has proven this is not the variable. There is a heating implement but the heat is kept constant. The temperature of the water coming out of the shower depends on the flow rate of the water. This investigation also involves the concept of energy transfer. The conservation law of energy states that "energy can neither be created nor destroyed but can only be transferred from 1 body to another through a medium". In this case the energy is being transferred is heat. The transfer is heat energy from the hot water in the metal container by the metal container ( medium - free electrons in metal ) to the water flowing through the pipe. I am investigating the effect of a changing flow rate on the temperature difference in a pipe. It will be important for me to carry out my experiment precisely and get a reasonable set of results because of all the variables involved such as temperature, and for the flow resistance in the pipe - viscosity, density, friction with pipe, specific heat capacity e.t.c. Factors affecting my investigation Viscosity The resistance to flow in a liquid can be characterised in terms of the viscosity of the fluid if the flow is smooth. Viscosity is a measure of the resistance of a fluid to deform under shear stress. It is commonly perceived as "thickness", or resistance to pouring. Viscosity describes a fluid's internal resistance to flow and may be thought of as a measure of fluid friction. Thus, water is "thin", having a lower viscosity, while vegetable oil is "thick" having a higher viscosity. ...read more.

I kept the volume of water, and the temperature of the water in it, constant. The tricky part of my setup was keeping the rubber tubing wrapped around the metal container. I tried various methods, cello tape first of all but the adhesive property of the cello tape was lost once it came in contact with the water and it did come in contact with water often, seeing as my experiment was based around water. Finally I had to improvise and I smeared glue all around the metal container and then set the tubing around it and held it in place with a bit of glue at this point the tubing was stuck around it and then I froze it, by placing it in the freezer and leaving it for approximately 26 hours. By this time the glue was hard and dry and the tube was properly in place. I had some water in the metal container kept at a constant temperature in this case 70 degrees. All I did was pass water through the top opening, this water was kept at a constant temperature. It then flowed around the pipe gathering energy from the metal container the water in the metal container was as previously stated at constant temperature. This water was heated by an old boiling ring which was placed in the middle of the metal container not in direct contact with the edges of the container. The same problem arose of finding a way to regulate the heat giving of by the heating implement i.e the boiling ring, I solved this by starting the experiment only when the temperature was at 70 degrees and then estimating the time it took for it to rise by a degree ( this was done roughly and mentally ). I counted roughly in my head the time taken for it to rise from 70-71 degrees. ...read more.

Logic says this is a good set of results because as the flow rate decreases it means that the water flows slower in and out of the tube meaning that there is an increased time taken between water being poured in and then out. This also means that the water is in the tube and in contact with the radiation of heat energy from the metal container for a longer time. There is an increased energy transfer, if the power were to be worked out it would be constant because there is an increase in the energy transferred AND also the time taken, both these would cancel out. The flow rate could have been improved in a variety of ways like o Using a tube with less friction o Pumping the water in faster, e.t.c From the results it can be said that there is an inverse relationship (as one quantity increase, the other decreases). The flow rate is inversely proportional to the temperature difference. This could be shown mathematically by the formula F = k T Key F - flow rate of water T - temperature difference k - constant of proportionality I am going to plot 2 sets of graphs, the first one showing the temperature difference on the y axis and flow rate on the x axis, this should give me a graph with a negative (decreasing) gradient and the second the temperature difference on the y axis and the inverse of the flow rate on the x axis and this should give me a graph with a straight line from origin. I will now try and find the value of k, this is going to be done by finding the gradient of the graph and then finding the inverse of that figure. Finding the gradient of a graph is done by applying the formula y1-y2 = k x1-x2 0.856 - 0.536 = 0.32 = 0.1793, 1 = 0.1793, k = 1 9.500 - 11.350 -1.85 k 0.1793 K = and this has the unit of cm3/s per degrees Celsius. ...read more.