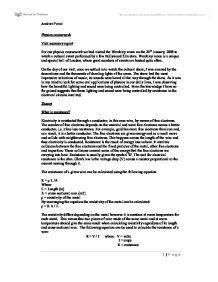 The resistance of a piece of wire is dependent on its temperature, length, cross-sectional area and the type of metal the wire is made of.

For our physics coursework we had visited the Wembley arena on the 20th January, 2009 to watch a cultural event performed by a few Bollywood film stars. Wembley arena is a unique and special hall of London, where great numbers of events are hosted quite often.

On the day of our visit, once we settled in to watch the cultural show; I was amazed by the decorations and the thousands of dazzling lights of the arena. The show had the most impressive selections of music; its sounds were heard all the way through the show. As it was in my mind to look for some real applications of physics in our daily lives, I was observing how the beautiful lighting and sound were being controlled. From the knowledge I have so far gained suggests that these lighting and sound were being controlled by resistance in the electrical circuits involved.

The resistance of a given wire can be calculated using the following equation:

ρ = resistivity of the metal

By rearranging the equation the resistivity of the metal can be calculated:

The resistivity differs depending on the metal however it is constant at room temperature for each metal.  This means that two pieces of wire made of the same metal and at room temperature should give the same result when calculating resistivity regardless of its length and cross-sectional area.  The following equation can be used to calculate the resistance of a wire:

The resistance of a piece of wire is dependent on its temperature, length, cross-sectional area and the type of metal the wire is made of.

Resistance occurs in using electricity; hence it is important to know the effects of consuming excessive electricity. One of the societal impacts is global warming. Global warming has been increasing in the past few years due to the increase in the production of carbon dioxide, among other gases, and fossil fuels. This can also result to pollution and acid rain, which damages our environment, destroys our ecosystems and our natural resources. Not only that, but our sea levels and rainfall can also be affected. Moreover, in terms of health, the products released from the combustion of fossil fuels are extremely dangerous, and could form respiratory and cardiac diseases, among other disabilities. When referring to our economy, we can see that people will start having money problems as not only will the prices for electricity increase but salaries have been lowered, due to the fact that our natural resources are running out because we are using them excessively.

I started off with the experiment by setting up the circuit as shown above. I had to be careful in connecting the circuit, because the voltmeter had to be placed in parallel and the ammeter, which had to be placed in series. The constantan wire was cut to just over 100cm so the crocodile clips could attach onto the wire, making the results more accurate.

I stretched out the wire and sellotape it to the ruler. I did this so I do not need to cut the wire every time, all I have to do is just move one of the crocodile clips to another length. The power supply is then switched on. I will then record the reading of the ammeter and put the results in a table. After this I will adjust the variable resistor to 3 volts, which would show up on the voltmeter, I will record the reading of the ammeter. I will once again adjust the variable resistor to 3 volts this time and record the reading.

The safety precautions that I need to be taken into consideration are: Handle the power supply carefully. Be careful when touching the wire, it may be hot, it might even burn if the voltage exceeds. Do not carry out the experiment in wet areas, as waster is a very good conductor of electricity, which could be dangerous if it comes in contact with the current.

To ensure that I conduct a fair test I will ensure that the experiment is done at least twice to have more reliable and accurate results. Wire measurements are kept the same and the equipment is in a good working order. I will also ensure that the thickness of the wire stays constant for each length and current. I shall also ensure that the current passing through the wire will not change until all the lengths of wire have been tested and the voltages recorded, then I will increase/decrease the current to the desired voltage. After every time I experiment I will let the wire cool down before I start my other experiment. And to improve the accuracy I will ensure that the use of the ruler, wires, etc remains the same. I will also record the readings from the ammeter and voltmeter by 3 decimal places.