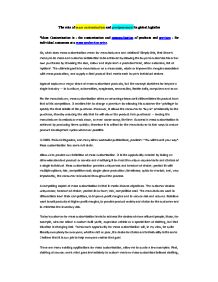 The role of mass customization and postponement in global logistics

The role of mass customization and postponement in global logistics "Mass Customisation is - the customisation and personalisation of products and services - for individual customers at a mass production price. So, what does mass customisation mean for manufacturers and retailers? Simply this, that there's money to be made and customer satisfaction to be achieved by allowing the buyer to customise his or her own purchases by choosing the size, colour and style from a predetermined, often extensive, list of 'options'. The ultimate goal is to manufacture on a mass scale, retain or improve the margins associated with mass production, and supply a final product that meets each buyer's individual desires. Apparel captures a major share of mass-customised products, but the concept stretches far beyond a single industry - to furniture, automobiles, eyeglasses, aeronautics, Barbie dolls, computers and so on. For the manufacturer, mass customisation offers an advantage because it differentiates his product from that of his competitors. It enables him to charge a premium for allowing his customer the 'privilege' to specify the final details of his purchase. Moreover, it allows the consumer to 'buy in' emotionally to the purchase, thereby reducing the risk that he will return the product he's purchased - forcing the manufacturer to restock or mark down, or even worse scrap, the item. Success in mass customisation is achieved by producing items quickly; therefore it is critical for the manufacturer to find ways to reduce product development cycles whenever possible. In 2002. Fortune Magazine, and many other worldwide publications, proclaim: "You will have it your way". Mass customisation has come full circle. Allow us to provide our definition of mass customisation. It is the opportunity created by taking an otherwise standard product or service and modifying it to meet the unique requirements and choices of a single individual. Mass customisation provides uniqueness and freedom of choice; perfect fit with multiple options; fair, competitive cost; single-piece production; timeliness; quick-to-market; and, very importantly, the consumer is involved throughout the process. ...read more.

A high product cube or weight increase through final manufacturing, as in the soft drink industry, favors postponement for reasons of reduced transportation and inventory carrying costs. We begin with the constructs of product customization and postponement. We then extend the latter (originally introduced by Alderson10) to include production postponement, up/downstream postponement, and distribution postponement. This expanded concept encompasses different strategies along the total supply chain that may be employed to meet customer demands while controlling costs. Next, we discuss the relationship between product customization and postponement and its potential for developing alternative market-oriented supply chain management strategies. Postponement delays manufacturing, assembly, configuration, or logistics operations until customer commitments are known. Postponement increases a company's flexibility to respond to demand shifts with minimal inventory, but on the other hand, it can make products more expensive because economies of scale associated with make-to-stock are difficult to duplicate. For example, Zinn and Bowersox find that products marketed under different brand names benefit from labeling postponement. In contrast, products sold in various configurations benefit from assembly postponement. Postponement strategies can be applied to form, time, and place. Form postponement means that companies delay production, assembly, or even design until after customer orders have been received, which increases the ability to fine tune products to specific customer wishes. Time and place or logistics postponement means that the forward movement of goods is delayed as long as possible in the chain of operations, and goods are kept in storage at central locations in the distribution chain. Taylor (1996) noted that postponement strategy is especially important for an international enterprise. International enterprises, with diverse markets, tend to have more extensive supply chains and encounter greater degrees of risks resulting from inventory management. These enterprises have to critically examine the trade-offs between reducing inventory risks (postponement strategies) and increasing the economies of scale in productions (anticipatory strategies). These combine the three areas of postponement: customization of products (form postponement) ...read more.