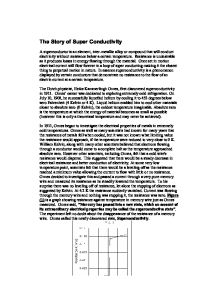 The Story of Super Conductivity

The Story of Super Conductivity A superconductor is an element, inter-metallic alloy or compound that will conduct electricity without resistance below a certain temperature. Resistance is undesirable as it produces losses in energy flowing through the material. Once set in motion electrical current will flow forever in a loop of super conducting making it the closest thing to perpetual motion in nature. In essence superconductivity is a phenomenon displayed by certain conductors that demonstrate no resistance to the flow of an electric current at a certain temperature. The Dutch physicist, Heike Kammerlingh Onnes, first discovered superconductivity in 1911. Onnes' career was dedicated to exploring extremely cold refrigeration. On July 10, 1908, he successfully liquefied helium by cooling it to 452 degrees below zero Fahrenheit (4 Kelvin or 4 K). Liquid helium enabled him to cool other materials closer to absolute zero (0 Kelvin), the coldest temperature imaginable. Absolute zero is the temperature at which the energy of material becomes as small as possible (however this is only a theoretical temperature and may never be achieved). ...read more.

Figure (1) is a graph showing resistance against temperature in mercury wire just as Onnes measured. Onnes said, "Mercury has passed into a new state, which on account of its extraordinary electrical properties may be called the superconductive state". The experiment left no doubt about the disappearance of the resistance of a mercury wire. Onnes called this newly discovered state, Superconductivity. Onnes recognized the importance of his discovery an electrical conductor with no resistance could carry current any distance with no loss. In one of Onnes experiments he started a current flowing through a loop of lead wire cooled to 4 K. A year later the current was still flowing without a significant loss in current. Onnes found that the superconductor exhibited what he called persistent currents, electric currents that continued to flow without an electric potential driving them. Onnes discovered superconductivity, and was awarded the Nobel Prize in 1913. By 1933 Walther Meissner and R. Ochsenfeld discovered that superconductors are more than a perfect conductor of electricity, they have an interesting magnetic property of excluding a magnetic field. ...read more.

In 1986, Georg Bednorz and Alex M�ller, working at IBM in Zurich Switzerland, were experimenting with a particular class of metal oxide ceramics called perovskites. Bednorz and M�ller surveyed hundreds of different oxide compounds. Working with ceramics of lanthanum, barium, copper, and oxygen they found indications of superconductivity at 35 K, a new record for a superconductor. In February of 1987, a perovskite ceramic material was found to superconduct at 90 K. This was a very significant discovery because now it became possible to use liquid nitrogen as a coolant, as these materials superconduct at significantly higher temperatures they are referred to as High Temperature Superconductors. Since then scientists have experimented with many different forms of perovskites producing compounds that superconduct at temperatures over 130 K. At the moment many governments, corporations and universities are investing large sums of money for research in High Temperature Superconductors. Electrical power applications for the high temperature superconductors are now practical and because of the increased machine reliability and the decrease in costs linked with the cooling of these devices at temperatures greater than 20 K. ...read more.