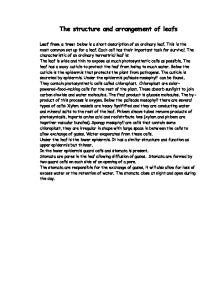 The structure and arrangement of leafs

The structure and arrangement of leafs Leaf from a tree: below is a short description of an ordinary leaf. This is the most common set up for a leaf. Each cell has their important task for survival. The characteristic of an ordinary terrestrial leaf is: The leaf is wide and thin to expose as much photosynthetic cells as possible. The leaf has a waxy cuticle to protect the leaf from losing to much water. Below the cuticle is the epidermis that protects the plant from pathogens. The cuticle is secreted by epidermis. Under the epidermis palisade mesophyll can be found. They contain photosynthetic cells called chloroplast. Chloroplast are solar- powered-food-making cells for the rest of the plant. These absorb sunlight to join carbon dioxide and water molecules. The final product is glucose molecules. The by-product of this process is oxygen. Below the palisade mesophyll there are several types of cells: Xylem vessels are heavy lignifified and they are conducting water and mineral salts to the rest of the leaf. Phloem sleave tubes remove products of photosyntasis, imports amino acid and redistribute ions (xylem and phloem are together vascular bundles). ...read more.

d) Look at the object from the side of the stage and use the lens adjuster making sure the lens is just above the object. e) Look down the eye piece and adjust the focus until the object is in focus. f) Change the magnification to a higher power. Adjust the focus until you se the slide clearly. 2a) 1 Epidermis, 2 Collenchyma, 3 Parenchyma, 4 Xylem, 5 Sclerenchyma, 6 Cambium 2b) Epidermis has tough fibers. Epidermis protects the plant from pathogens and forces like wind. The epidermis in helianthus is one cell thick but has developed small, thin hair. This is to preserve water in the plant by limiting air movement and to reflect light. The epidermis also produces the cuticle. This is to protect the plant further from water loss and invasion against bacteria and pathogens. Sclerenchyma is like a cap of the vascular bundle. They have developed in to supporting fibers that offer the plant strength. They are heavy lignified and have no living content. Cambium is a non-specified cell cells that are found in the middle of xylem or phloem. They are square like cells that can either divide to xylem or phoem, depending where the cells are needed. Source: www.microscopy-uk.net http://www.seftoncoast.org.uk www.biologie.uni-hamburg.de Adaptations of Plants For Mr. Love By Jaenette Satherlund ...read more.