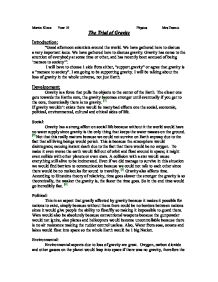 The Trial of Gravity

The Trial of Gravity

I will have to choose 1 side from either, “support gravity” or agree that gravity is a “menace to society”. I am going to be supporting gravity. I will be talking about the loss of gravity in the whole universe, not just Earth.

Gravity is a force that pulls the objects to the center of the Earth. The closer one gets towards the Earths core, the gravity becomes stronger until eventually if you get to the core, theoretically there is no gravity. [1]

If gravity wouldn’t exists there would be many bad effects one the social, economic, political, environmental, cultural and ethical sides of life.

Gravity has a strong affect on

This in an aspect that greatly affected by gravity because it makes it possible for nations to exist, simply because without them there could be no borders between nations since it would give people the ability to float/fly so making it impossible to guard them. Wars would also be absolutely because conventional weapons because the gunpowder would not ignite, also planes and helicopters would become uncontrollable because there is no air resistance making the rudder control useless. Also, Water from seas, oceans and lakes would float into space so the whole Earth would be 1 big Nation.

Environmental aspects due to loss of gravity are great.  Oxygen, carbon dioxide and other gasses on the planet would leap into space if there was no gravity, therefore the plants, trees and every other aspect of life on the Earth would die.  The Plants and trees would starve of carbon dioxide. Another environmental aspect that would occur if the universe had no gravity is that magma would escape from below Earth and would destroy all organisms on Earth.

ld fall apart and all the living organisms that lived on earth or in the rest of the universe would die/perish in a short instant.. Gravity is therefore one of the most important necessities for life.  Also, all laws of physics and quantum physics would have changed. Sub-atomic particle would not behave the same way. Eventually, the atmosphere would disappear.[5]

So gravity in the end is very good for the society.