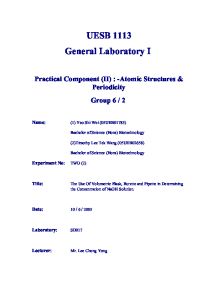 The Use of Volumetric Flask, Burette and Pipette in Determining the Concentration of NaOH Solution

to yield H2PO4-, then HPO4-2, and finally PO4-3 , the triply charged orthophosphate ion, usually just called phosphate. An organic example of a triprotic acid is citric acid, which can successively lose three H+ ions to finally form the triply charged citrate ion. Even though the positions of the H atoms on the original molecule may be equivalent, the successive Ka values will differ since it is energetically less favorable to lose a positive H+ if the ion is more negatively charged. Acids are very dangerous. They are extremely reactive with metals and strong acids can give very serious burns just by touching them for an instant. If contact with an acid should occur seek medical attention immediately. Different definitions of acid/base The word acid comes from the Latin acidus meaning sour. In chemistry the term acid has a more specific meaning. The Swedish chemist Svante Arrhenius defined an acid to be a substance that gives up hydrogen ions (H+) when dissolved in water (the product of the solution, H2O + H+, is called a hydronium ion, H3O+), while bases are substances that give up hydroxide ions (OH-). This definition limits acids and bases to substances that can dissolve in water. Later on, Br�nsted and Lowry defined an acid to be a proton donor and a base to be a proton acceptor. In this definition, even substances that are insoluble in water can be acids and bases. The most general definition of acids and bases is the Lewis definition, given by the American chemist Gilbert N. Lewis. Lewis theory defines a "Lewis acid" as an electron-pair acceptor and a "Lewis base" as an electron-pair donor. It can include acids that do not contain any hydrogen atoms, such as iron(III) chloride. Acid/base systems are different from redox reactions in that there is no change in oxidation state. The Lewis definition can also be explained with molecular orbital theory. ...read more.

can combine with one mole of sulfuric acid (H2SO4) to form two moles of water and one mole of sodium sulfate. 2NaOH + H2SO4 � 2H2O + Na2SO4 . Precaution Steps: 1. To fill a buret, close the stopcock at the bottom and use a funnel. You may need to lift up on the funnel slightly, to allow the solution to flow in freely. 2. Before titrating, condition the buret with titrant solution and check that the buret is flowing freely. To condition a piece of glassware, rinse it so that all surfaces are coated with solution, then drain. Conditioning two or three times will insure that the concentration of titrant is not changed by a stray drop of water. 3. Check the tip of the buret for an air bubble. To remove an air bubble, whack the side of the buret tip while solution is flowing. If an air bubble is present during a titration, volume readings may be in error. 4. Place the tip of the pipette in the solution and release your grip on the bulb to pull solution into the pipette. Draw solution in above the mark on the neck of the pipette. If the volume of the pipette is larger than the volume of the pipette bulb, you may need to remove the bulb from the pipette and squeeze it and replace it on the pipette a second time, to fill the pipette volume completely. 5. After the solid is completely dissolved, very carefully fill the flask to the 250 mL mark. Move your eye to the level of the mark on the neck of the flask and line it up so that the circle around the neck looks like a line, not an ellipse. Then add distilled water a drop at a time until the bottom of the meniscus lines up exactly with the mark on the neck of the flask. Take care that no drops of liquid are in the neck of the flask above the mark. Conclusion: After the experiment, we found that the concentration of NaOH is 0. ...read more.