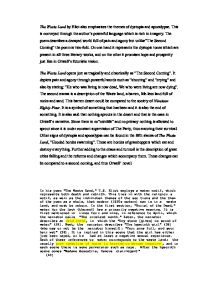 The Waste Land by Eliot emphasises the themes of dystopia and apocalypse.

The Waste Land by Eliot also emphasises the themes of dystopia and apocalypse. This is conveyed through the author's powerful language which is rich in imagery. The poem describes a decayed world full of pain and agony but unlike"The Second Coming" the poem is two-fold. On one hand it represents the dystopic tones which are present in all three literary works, and on the other it promises hope and prosperity just like in Orwell's futuristic vision. The Waste Land opens just as tragically and chaotically as "The Second Coming". It depicts pain and agony through powerful words such as "shouting" and "crying" and also by stating: "He who was living is now dead, We who were living are now dying". The second stanza is a description of the Waste land, a barren, life-less land full of rocks and sand. This barren desert could be compared to the society of Nineteen Eighty-Four. It is a symbol of something that has been and it is also the end of something. It is also said that nothing sprouts in the desert and that is the case in Orwell's narrative. Since there is no"ownlife" and no privacy nothing is allowed to sprout since it is under constant supervision of The Party, thus ensuring their survival. ...read more.

This section, again, is a negative association with water. Now, the river is brown and deserted, with no evidence of the former happiness (sex) that happened on the river bank, with the nymphs. The only sex now is referred to as "White bodies naked bodies on the low damp ground" (193), which implies lust and an unpleasant sexual experience ,devoid of love. The fishing reference is an allusion to either the Fisher King, Buddha, or Jesus, which again ties water to the religion motif. The second major reference to water in this section regards two prostitutes washing their feet: O the moon shone bright on Mrs. Porter And on her daughter They wash their feet in soda water (199-201) This is a perversion of Jesus washing the apostles' feet as an act of humility; here are two prostitutes, considered dirty and sinful, doing the same. Here again is a religious tie-in. The perversion also emphasizes the waste land's twisted mode of existence. Both of these references to water also tie in with the theme of the section, that fire is a symbol for the meaningless pleasures of the world. All three of the references to water have something to do with sex. ...read more.

The pitiable condition of the streets after an evening shower is a picture not so worth mentioning after all. Maybe the images have been deliberately chosen by the poet in order to reflect the dull and dreary times in England then, when under the sway of industrialization and war, life was undergoing a tremendous change, which to these poets was not inspiring at all. Eliot draws our attention towards burnt-out ends of cigarettes, grimy scraps, withered leaves and broken blinds, none of which are refreshing or pleasing even in the remotest sense of the words. The modern poet looks for meaning not in the beautiful and refreshing aspects of Nature like the Romantics, but in the dull and dreary aspects of mundane living. And failing to find any assurance in these, they are disillusioned and frustrated. The modern poet is not obsessed with 'beauty', but he etches life's ugliness in verse. The portrayal is so stark and real that it has a great impact on the reader and transforms their mood completely. The lonely cab horse may symbolically represent the lonely man or even the lonely poet, who is frustrated with life and steams and stamps in disgust. The lighting of the lamp doesn't illuminate in a positive sense. It only serves to highlight the miserable condition of the streets after the gush of rainfall. ...read more.