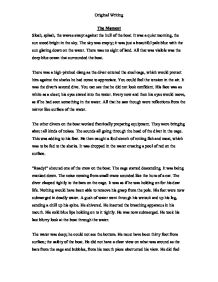 There was a high-pitched clang as the diver entered the steel cage, which would protect him against the sharks he had come to appreciate. You could feel the tension in the air. It was the diver's second dive. You can see that he did not look confident.

The Moment Slosh, splash, the waves swept against the hull of the boat. It was a quiet morning, the sun stood bright in the sky. The sky was empty; it was just a beautiful pale blue with the sun glaring down on the water. There was no sight of land. All that was visible was the deep blue ocean that surrounded the boat. There was a high-pitched clang as the diver entered the steel cage, which would protect him against the sharks he had come to appreciate. You could feel the tension in the air. It was the diver's second dive. You can see that he did not look confident. His face was as white as a sheet; his eyes stared into the water. Every now and then his eyes would move, as if he had seen something in the water. ...read more.

His feet were now submerged in deadly water. A gush of water went through his wetsuit and up his leg, sending a chill up his spine. He shivered. He inserted the breathing apparatus in his mouth. His cold blue lips holding on to it tightly. He was now submerged. He took his last blurry look at the boat through the water. The water was deep; he could not see the bottom. He must have been thirty foot from surface; the safety of the boat. He did not have a clear view on what was around as the bars from the cage and bubbles, from his mouth piece obstructed his view. He did feel slightly more relaxed now, as he lost some of his nervousness and there was nothing around in sight, in the water. ...read more.

This time the shark homed on to the sounds of the diver. It was like a bullet. The shark shot itself through the water and collided with the cage. It was such a collision the cage buckled and the door popped open. The diver was now vulnerable. The shark was impelled to attack. Its mouth opened, presenting its razor-sharp teeth. The sharks paddled its tail fin. It engaged on its target! The diver was struck, it took the breath out of him, and he released his mask of his face. He was gasping for air. The shark's jaw clasped tightly, around the torso of the seal like diver. The wetsuit and body being torn apart. It was vicious. The water now became murky with the blood of the diver. Twisting and turning the body, the shark continued. The innards were now falling out. It took one last swipe at the body, putting the diver to rest. It was massacred. The body was left disbursed in the water. ?? ?? ?? ?? Original Writing ...read more.