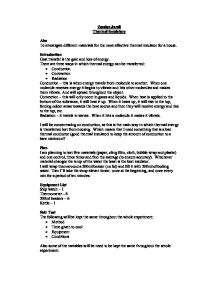 To investigate different materials for the most effective thermal insulator for a house.

Heat transfer is the gain and loss of energy.

There are three ways in which thermal energy can be transferred:

Conduction – this is when energy travels from molecule to another.  When one molecule receives energy it begins to vibrate and hits other molecules and makes them vibrate. And will spread throughout the object.

Convection – this will only occur in gases and liquids.  When heat is applied to the bottom of the substance, it will heat it up.  When it heats up, it will rise to the top, forcing colder areas towards the heat source and then they will receive energy and rise to the top, etc.

Radiation – it travels in waves.  When it hits a molecule it makes it vibrate.

I will be concentrating on conduction, as this is the main way in which thermal energy is transferred lost from housing.  Which means that I need something that is a bad thermal conductor (good thermal insulator)

I think that the best thermal insulator will be the bubble wrap due to the fact that it contains trapped air.  Trapped air is a good insulator therefore it takes longer for energy to transfer through gasses because the molecules are further part, a vibrating molecule takes longer to hit into another molecule and make it vibrate.  The worst thermal insulator will be something that has compact molecules as it is easy for the vibrations to spread throughout.

Although this experiment went well I felt that it could have been improved, for example. Having the same length and width of each material would have the experiment much better in fairness.  Also I was not able to repeat the experiment twice more due to lack of time which severely affected the accuracy of the results and investigation.  Finally having a thermometer for making sure the room temp stays the same

I think that the method was fine and has no problems of any sort except one:  testing the room temp and making sure it stays the same.

To conclude, this experiment was seemingly fair, however there is a margin for improvement.

The paper was the best insulator however I think this was an accident due to the trapped air.

I now know that the closer the molecules in an object the better the object is at conducting energy. Which means any thing with trapped air would be a sufficient insulator.  This is why they use double glazed windows as an insulator.

This is a well written and structured report.
1. The sources of information need to be referenced.
2. There are several pieces of information in the wrong section.
3. The evaluation should suggest further research opportunities.
****