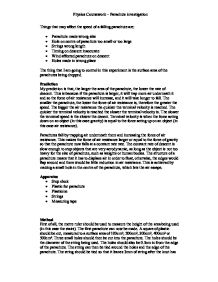 Things that affect the speed of a falling parachute.

I closed the windows and made as little movement as possible while conducting the experiment in order to prevent the wind from blowing the parachute. This was quite effective, as the wind could have easily blown the parachute off course or blown it up or down. I also used the same weight each time, in case the other weights were different weights, either by manufacturing fault or by usage of the weights, getting chips out of them or being otherwise damaged. This was useful because it made the test fairer, because lighter weights would make the parachute fall slower than normal, and bigger weights would make the parachute fall faster than normal. There was the problem of not have very accurate measuring instruments that could measure to the nearest millimetre accurately. The plastic was also very easy to fold and crumple, so it was not always flat, which could have changed the rate of descent again. As a further experiment to show that gravity is not the only force acting on the parachute is, if I were to conduct this same experiment in a vacuum because there is no air in a vacuum which means that there is no air resistance so all the parachutes no matter what there surface area would fall at the same rate and speed. Physics Coursework - Parachute investigation ...read more.