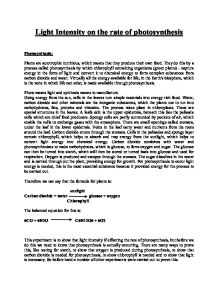 This experiment is to show that light intensity if effecting the rate of photosynthesis, but before we do this we need to know that photosynthesis is actually occurring.

Light Intensity on the rate of photosynthesis Photosynthesis: Plants are autotrophic nutritious, which means that they produce their own food. They do this by a process called photosynthesis by which chlorophyll containing organisms (green plants) - capture energy in the form of light and convert it to chemical energy to form complex substances from carbon dioxide and water. Virtually all the energy available for life, in the Earth's biosphere, which is the zone in which life can exist; is made available through photosynthesis. Photo means light and synthesis means to manufacture. Using energy from the sun, cells in the leaves turn simple materials into energy rich food. Water, carbon dioxide and other minerals are the inorganic substances, which the plants use to tun into carbohydrates, fats, proteins and vitamins. The process takes place in chloroplasts. These are special structures in the leaves. A leafs skin is the upper epidermis, beneath this lies the palisade cells which are chief food producers. Spongy cells are partly surrounded by pockets of air, which enable the cells to exchange gases with the atmosphere. There are small openings called stomata, under the leaf in the lower epidermis. Veins in the leaf carry water and nutrients from the roots around the leaf. Carbon dioxide enters through the stomata. Cells in the palisades and spongy layer contain chlorophyll, which helps to absorb and trap energy from the sunlight, which helps to convert light energy into chemical energy. ...read more.

To show that light is necessary for photosynthesis: This experiment probably helped us the most. First we placed a growing plant in a cupboard for 2 -3 days, to de-starch the plant. It cannot photosynthesis because all the starch in the plant is already used up. A leaf is taken from the de-starched plant and is tested for starch, it should remain the same colour as there will be no starch present. A stencil (black paper or foil with a cut our shape) in foil is then placed over another leaf and the plant is left out in the sun. Later the stencil is removed and the leaf it tested for starch. The regions that had been exposed to the light will turn black when tested with iodine for starch. Those regions that had foil or the black paper, which should be cream or of a lighter colour should remain the same, showing that there is no starch present, therefore no photosynthesis was taking place, showing that light is needed for photosynthesis. So these experiments showed that carbon dioxide, light and chlorophyll is needed for photosynthesis. Meaning that if any one of them was subtracted from the formula or reduced in volume given to the plant then the rate of photosynthesis would decrease. Chlorophyll uses light energy to perform photosynthesis. It can only do this as fast as the light source is arriving. ...read more.