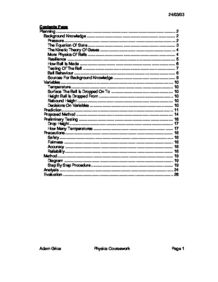 The Equation Of State

The Kinetic Theory Of Gases

How Ball Is Made

Testing Of The Ball

Surface The Ball Is Dropped On To

Height Ball Is Dropped From

The three scientists Boyle, Amontons and Charles investigated the relationship between gas, volume and temperature. Boyle discovered that for a fixed mass of gas at constant temperature, the pressure is inversely proportional to its volume. So in equation form this is:

pV = constant if T is constant

Amontons discovered that for a fixed mass of gas at constant volume, the pressure is proportional to the Kelvin temperature. So in equation form this is:

Shown below this is represented on graphs in (oC) and (K).

Charles discovered that for a fixed mass of gas at constant pressure, the volume is proportional to the Kelvin temperature. So in equation form this is:

The Equation Of State

Testing Of The Ball

The current WSF Specification for the Standard Yellow Dot Championship Squash Ball as it appears in Appendix 7 of the Rules of Squash dates from October 1990, apart from a minor amendment made in July 1995, and determines the permitted diameter, weight, stiffness, seam strength and rebound resilience of the championship ball. No specifications are set for other types of ball, "which may be used by players of greater of lesser ability or in court conditions which are hotter or colder than those used to determine the yellow dot specification". But how are balls tested to ensure that they meet these specifications?

The testing procedure itself states somewhat confusingly that: "For the purposes of inspection, balls manufactured from the same mix shall be arranged in batches of 3000 numbers or part thereof manufactured in one shift in a day." Fifteen balls are then chosen at random from each batch and divided into three groups of five balls. One group is tested for diameter, weight, and stiffness; another group for seam strength; the third group for rebound resilience.

First the 15 selected balls must be left in the laboratory for 24 hours to ‘condition’ them to a temperature of 23oC. Their diameter, measured perpendicular to the seam, must be between 39.5mm and 40.5mm, and their weight between 23 and 25g. To be measured for stiffness the balls are held between two plates with the seam parallel to the plates and compressed at a rate of 45–55mm per minute. They are compressed by 20mm six times, the test measurement being made on the sixth deformation only. The stiffness of a ball is calculated by measuring the compressive force at the point where it has been deformed by 16mm and dividing that by 16 to give a ‘force per millimetre’. The result must be between 2.8 and 3. 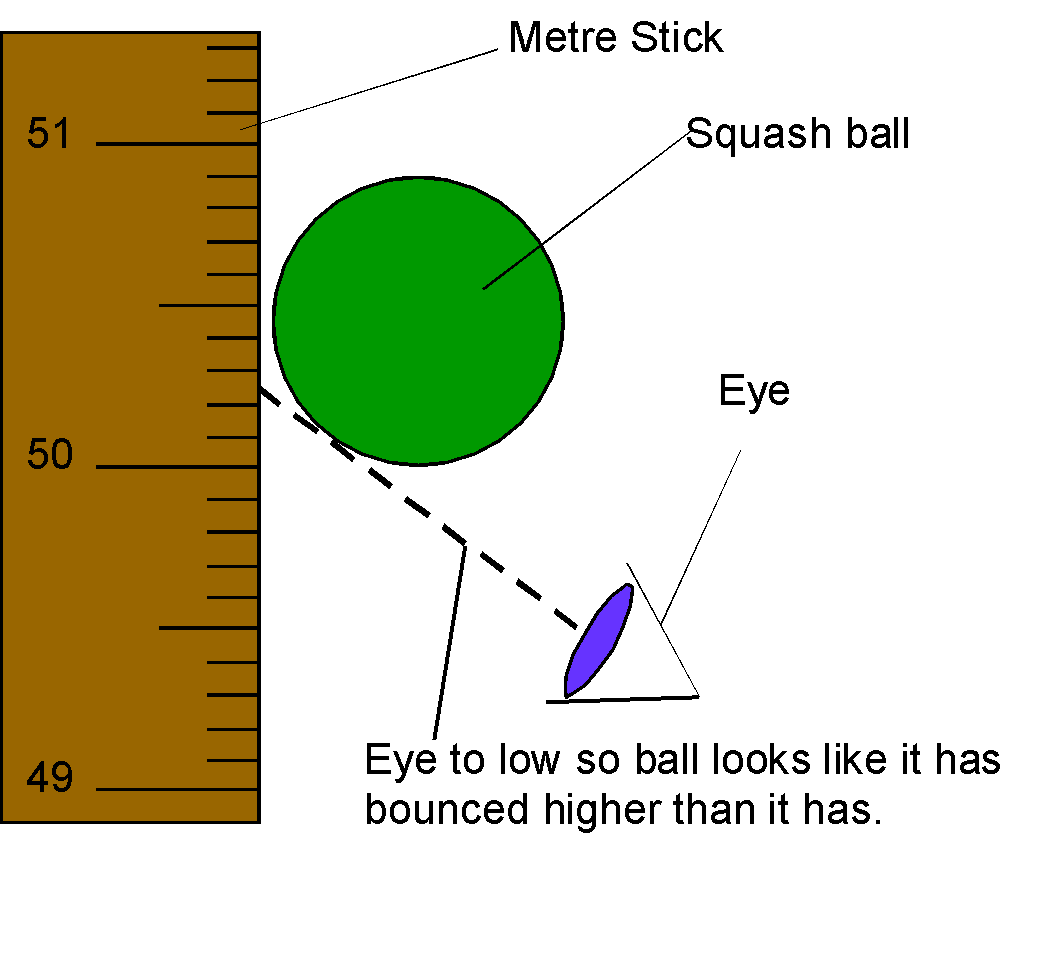 Also I was pleased with my idea of using holders, which attach to the squash ball to hold it under water to stop it from floating meaning the temperature would not be being applied to the whole of the squash ball. Also I kept the ball in the water for sufficient time for the water to heat the ball up to the desired temperature.

Sources of error could be due to the ball not being able to maintain the correct temperature and an electric water bath would have been a better method but this was also is a limitation, as we don’t have many at our sixth form. Really every piece of equipment including the tongs surface the ball bounced onto would all need to be at the same temperature for the experiment to work really accurately and fairly as the ball gradually cooled down during the course of a test.

I feel I did enough temperatures to give me enough points for my graph but I would like to have tried more temperatures either side of the ones I did but there are limitations again here as for a safety reason I cant go above 80oC as the rubber ball would start to melt and also getting below 10oC is very difficult.