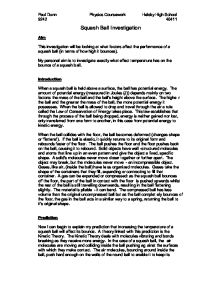 This investigation will be looking at what factors affect the performance of a squash ball (in terms of how high it bounces).

This investigation will be looking at what factors affect the performance of a squash ball (in terms of how high it bounces).

My personal aim is to investigate exactly what effect temperature has on the bounce of a squash ball.

When the ball collides with the floor, the ball becomes deformed (changes shape or ‘flattens’).  If the ball is elastic, it quickly returns to its original form and rebounds faster of the floor.  The ball pushes the floor and the floor pushes back on the ball, causing it to rebound.  Solid objects have well-structured molecules and atoms that line up in an even pattern and give the object a fixed, specific shape.  A solid’s molecules never move closer together or further apart.  The object may break, but the molecules never move - an incompressible object.  Gases, like air, (inside the ball) have less organized molecules.  Gases take the shape of the containers that they fill, expanding or contracting to fill that container.

Squash balls all contain air and are not always at exactly the same pressure.  This could affect the test as it could make the ball lighter or heavier so this should be kept constant by using the same ball right through the experiment.

As discovered in preliminary experiments, the greater the height from which the ball is dropped, the higher it will bounce back - at different heights the ball possesses more/less potential energy, gains more/less kinetic energy concluding in a harder/softer impact with the surface below, producing a higher/lower bounce.  Throughout the experiment, the height will be kept at a constant.  At each temperature the ball will be dropped three times from the same fixed height to ensure a fair result.

The same equipment should be used throughout the experiment i.e. the same surface (reasons discussed above), same metre rule etc.  Also, one individual will be appointed to read off values from the metre rule for the bounce back height of the ball as different people will approximate the separate height values differently making the results slightly anomalous.

This variable affects the bounce of a ball in a number of ways:

A greater number of repeats at the same temperature could gain more precise results, for example, I used three bounces and created an average from those three so using more than three bounces would produce an even more accurate average still.I could create a separate investigation involving how a ball’s pressure increases/decreases when heated. I could aim to find out if a relationship exists between the heights to which a squash ball bounces based on internal air pressure.  Then I could analyse and plot the results to see what the trend is (if there is a trend) and how it compares with that of the ball’s bounce and the temperature.Balls of different materials could be heated and then tested to see how their material affects their bounce height.This experiment involves a variety of variables all of which could be tested if there were no time constraints:

Endless other such experiments could be conducted at different altitudes, in areas of different atmospheric pressure etc.