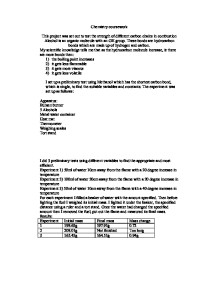 Method: I am going to take a flask of alcohol and measure its mass. Once recorded I am going to use the same procedure as in my preliminary. The beaker with 50ml of water will be held by a tort stand 10cm above the floor. The thermometer is placed in the water and the initial temperature is recorded. The alcohol is placed under the beaker and lit. It is left there until the temperature of the water has changed 40 degrees. The flame is then put out and the final mass of the alcohol is measured. This experiment is repeated 3 times with 5 different alcohols. I think that this is a relatively fair experiment. I decided to cover the experiment with books so that the wind or a gentle breeze would not affect the flame, disrupting the experiment. I also made sure that the beaker was attached to the tort stand in the same place so that the distance between the flame and the water was the same. I used the same beaker but cleaned it before each experiment. I used the same type of water (distilled) and all initial temperatures were relatively close. ...read more.

This lowered the accuracy of the average, thus lowering the accuracy of the calculations. The apparatus was vary simple using a tort stand and a ruler to judge the distance for the height of the beaker. Because of the time limit I could only have a small amount of water and a small temperature change. This could have severely altered my results as the combustion may not have completed. The alcohol was very limited, each had been used before. The flames were different sizes due to different size wicks in the alcohol. I made an effort to protect the flame but in some cases the flame had to be re-lit due to a draught in the classroom. The only anomalie was using Pentanol. This was the longest carbon chain. I think this was the least accurate as combustion was not completed. This however did not affect my experiment greatly as I could still identify a strong positive correlation in my results, thus leaving my results reliable enough to come to my conclusion. If I were to do the experiment again the main aspect needed to be improved would be the time period. If I had longer to do the experiment I could use a greater range of experiments thus making my average more accurate. Christian Wimshurst UVD ...read more.