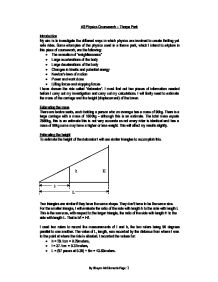 Thorpe Park - investigate the different ways in which physics are involved to create thrilling yet safe rides.

My aim is to investigate the different ways in which physics are involved to create thrilling yet safe rides. Some examples of the physics used in a theme park, which I intend to explore in this piece of coursework, are the following:

I have chosen the ride called “detonator”. I must find out two pieces of information needed before I carry out my investigation and carry out my calculations. I will firstly need to estimate the mass of the carriage and the height (displacement) of the tower.

To estimate the height of the detonator I will use similar triangles to accomplish this.

I recorded the times with a standard digital stopwatch. I recorded three sets of results for the five times and worked out an average for a more accurate set of results. This was a reliable but inaccurate method as many human or technical errors where possible, causing an unfair set of results.

Galileo first introduced the concept known as free fall. According to legend, Galileo dropped balls of different mass from the Leaning Tower of Pisa to help support his ideas. These classic experiments led to the finding that all objects free fall at the same rate, regardless of their mass.

An object in the state of free fall is only influenced by the force of gravity. The object has a downward acceleration toward the centre of the earth (9.81ms-2), the source of gravity.

This is near the value of acceleration due to gravity. I think this is a reasonable result due to the limitations. Firstly the displacement was just an estimate and may not be the exact value, this would affect the result, as it may be a greater or less value.

I think that this investigation was overall very successful. I estimated the height of the detonator to be 31.08meters high. I later researched on the Internet and found the actual height to be 30.48. My estimate was only 0.6 meters out and was a very pleasing result. To improve this investigation I would spend a bit more time in the theme park to gather and check through the calculations and to make sure they are accurate.