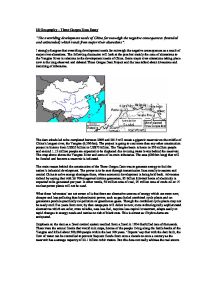 IB Geography - Three Gorges Dam Essay "The overriding development needs of China far outweigh the negative consequences (intended and unintended) which result from major river alterations". I strongly disagree that overriding development needs far outweigh the negative consequences as a result of major river alterations. The following discussion will look at the pros but mainly the cons of alterations to the Yangtze River in relations to the development needs of China. Some major river alterations taking place now is the long observed and debated Three Gorges Dam Project and the less talked about diversions and damming of tributaries. The dam scheduled to be completed between 2009 and 2013 will create a gigantic reservoir on the middle of China's longest river, the Yangtze (6,300 km). The project is going to cost more than any other construction project in history from US$25 billion to US$75 billion. The Yangtze basin is home to 350 million people and around 1.13 million people are expected to be displaced due to rising water levels behind the reservoir. The map above shows the Yangtze River and some of its main tributaries. The area (600 km long) that will be flooded and become a reservoir is indicated. ...read more.

But this does not really address the real source of flooding, which is the loss of forest cover in the Yangtze watershed and the loss of 13,000 km2 of lakes (which had greatly help to lessen floods) due to siltation, reclamation and uncontrolled development. In the hopes of trapping most of the silt before it reaches the dam, four more dams are being built on the Yangtze River's longest tributary, the Jinsha (Golden Sand) River. The Jinsha flows for more than 1,200 miles from Tibet to enter the Yangtze at Yibin in Sichuan province. Officials thought that the best way to deal with the problem of silt building up behind the reservoir at the three gorges dam was to built even more dams, which is clearly an absurdity. To the government because the population is sparse along the Jinsha so they think that it is alright to let silt be trapped in those dams and cause floods there. The dam threatens a double blow to the Yangtze's water quality. A toxic cocktail of arsenic, mercury, lead, cyanide and other cancer-causing heavy metals are poured into and will be stored in the reservoir that is to water some of China's most fertile farmland and due to provide drinking water for millions. ...read more.

Shanghai's municipal and industrial water quality could suffer even more when the dam reduces the river's flow, which flushes the saltwater out of the delta and provides the city with fresh water. Fluctuations in the river's flow would also disrupt the water supply to numerous downstream lakes, destroying the wetland habitats of numerous endangered species, including the Asian waterfowl and the Siberian crane. Silt trapped behind the dam would deprive the regions downstream and the river's estuary of vital nutrients, causing a decline in freshwater and marine fisheries. The loss of silt could also accelerate erosion along 800 km of coast destroying some of China's best farmland. Whether a dam is built or a river channel is dug out to divert flow, the development made cannot compensate for the loss of local culture and natural beauty. 1,300 historical sites, temples and some of the world's finest scenery will be submerged. This would also cause a drop in revenue from tourism. It is clear that if any country wants to develop, first of all they must clean up and manage their water source. They should not use the dam as a means of short-term relief in taming floods and producing energy. Therefore, the overriding development needs of China do not outweigh the negative consequences which result from major river alterations. ...read more.