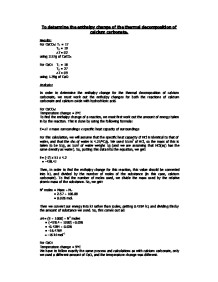 To determine the enthalpy change of the thermal decomposition of calcium carbonate.

To determine the enthalpy change of the thermal decomposition of calcium carbonate. Results: For CaCO3: T1 = 17 T2 = 19 ?T= 02 using 2.57g of CaCO3 For CaO: T1 = 18 T2 = 27 ?T= 09 using 1.39g of CaO Analysis: In order to determine the enthalpy change for the thermal decomposition of calcium carbonate, we must work out the enthalpy changes for both the reactions of calcium carbonate and calcium oxide with hydrochloric acid. For CaCO3: Temperature change = 2�C To find the enthalpy change of a reaction, we must first work out the amount of energy taken in by the reaction. This is done by using the following formula: E=?T x mass surroundings x specific heat capacity of surroundings For this calculation, we will assume that the specific heat capacity of HCl is identical to that of water, and that the shc of water is 4.2J/�C/g. We used 51cm3 of HCl, so the mass of this is taken to be 51g, as 1cm3 of water weighs 1g (and we are assuming that HCl(aq) has the same density as water). So, putting this data into the equation, we get: E= (-2) ...read more.

The reactions took place in a glass beaker. Glass has a relatively high heat capacity, and so a large amount of heat which is either taken in or given out is lost to the apparatus. This is obviously a major problem, especially with the reaction of calcium carbonate with HCl, as this does not appear to have a very large change in temperature, so every slight bit of absorption by the apparatus will have a large effect on the temperature change, and consequently the enthalpy change. Th other piece of apparatus that will have absorbed a lot of heat is the thermometer itself, as it is also made of glass, and so also has a high heat capacity, leading to similar problems as with the beaker. Another inaccuracy in the experiment was the time at which the temperature was taken - it was taken at the end of the reaction, which will have resulted in a temperature change which will have been less than it should have been. This can be counteracted by taking the peak temperature reached. The problem of heat loss to the apparatus could also be reduced by performing the experiment in an insulating container - for example; a polystyrene cup would dramatically reduce the amount of heat lost. ...read more.

This could have affected the results, by the concentration not being accurate. If this were the case, however, then the error would have been systematic, and so will have appeared in both sets of results, as the acid was drawn from the same bottle. Another one of these small errors is the accuracy of the balances - the readings given may not have been entirely accurate. However, this slight inaccuracy (?0.004g) pales in the face of the other experimental problems, so it can be safely disregarded. These problems were not the only ones with the experiment - the major factor being that it was only performed once, with no repeats - these values were taken to be correct, with no comparisons made. This could easily be rectified by performing a suitable number of repetitions - for example, 4 repetitions could be made, and an average taken. This would vastly improve the reliability of the end results, as the average would more accurately reflect the true temperature change. Overall, there were a large number of problems with this experiment, and correspondingly, there are a large number of things that I would like to change if I were to be able to repeat this experiment. The experiment was successful I that results were obtained, but I suspect that these results are vastly different to the actual values. ...read more.