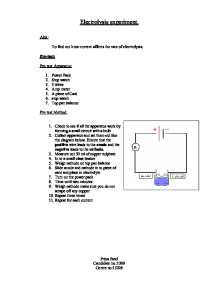 To find out how current affects the rate of electrolysis

Electrolysis experiment. Aim: To find out how current affects the rate of electrolysis. Pre-test: Pre-test Apparatus: 1. Power Pack 2. Stop watch 3. 3 wires 4. Amp meter 5. A piece of Card 6. stop watch 7. Top pan balance Pre-test Method: 1. Check to see if all the apparatus work by forming a small circuit with a bulb 2. Collect apparatus and set them out like the diagram below. Ensure that the positive wire leads to the anode and the negative leads to the cathode. 3. Measure out 50 ml of copper sulphate 4. In to a small class beaker 5. Weigh cathode on top pan balance 6. Slide anode and cathode in to piece of card and place in electrolyte 7. Turn on the power pack 8. Time until two minutes 9. Weigh cathode make sure you do not scrape off any copper 10. Repeat three times 11. Repeat for each current Pre-test Findings: By doing this pre-test I have learnt that: * The analog amp meter is very unreliable it * To be very accurate I need to use a multi meter * To be careful not to scrape of copper when measuring weight * Make sure that the anode and the cathode do not touch during the experiment ...read more.

The student has answered the question and drawn the correct conclusions from their data. The essay is very thorough and covers all variables which could affect the experiment. Some of the content included is above GCSE level and shows ...

The student has answered the question and drawn the correct conclusions from their data. The essay is very thorough and covers all variables which could affect the experiment. Some of the content included is above GCSE level and shows extended research around the subject to get as accurate results as the student can, although some sections included are irrelevant to the essay.

The student shows evidence of trying to control as many variables as possible to increase the validity and reliability of the experiment which included repetition of trails. Although there is no evidence of the student calculating averages from their results. The pre-test section was impressive as it showed that the student was considering all aspects of the experiment and modified their method, which was fairly well written. The student also includes a safety list which is very in depth. In the conclusion the whole essay is nicely summarised and does include the calculation of percentage accuracy to show the reliability of their results and allows them to be critical of them. However these calculations, although brilliant to include, should be placed elsewhere in the essay as the conclusion shouldnÃ¢â‚¬â„¢t include any new evidence.
The research section is very impressive as the student has tried to control all the variables in the experiment, even those not covered at GCSE. However the paragraph about how concentration affects the rate of electrolysis seems confused and is contradicting itself. An increase in the concentration of the solution should increase the rate of electrolysis as there are more ions available to accept electrons. Also the student fails to realise that the charge carriers are the ions in the solution and there is no flow of electrons between the electrodes. Furthermore, the resistivity of water is irrelevant as water does not conduct electricity without the presence of aqueous ions. In the paragraph below this the student makes another mistake by assuming that the rate is fixed when all the variables are constant. This is untrue as the more copper which precipitates out of the solution, the less ions available and the less surface available on the electrode. There are a few issues with the studentÃ¢â‚¬â„¢s knowledge of the behaviour and charge of ions, as the student states that the Cu2+ ion needs to lose electrons at the negative cathode where in fact it would gain them. This shows that the student doesnÃ¢â‚¬â„¢t really understand the fundamentals behind the electrolysis process which is further emphasised with the final paragraph where they explain their prediction. Throughout the essay there is also an incorrect use of half equations. The section where the student tries to calculate something using faradayÃ¢â‚¬â„¢s law is incorrect and completely irrelevant to the question.

Although some concepts are misunderstood, the technical terms are used correctly most of the time. There are very few spelling and grammatical errors.