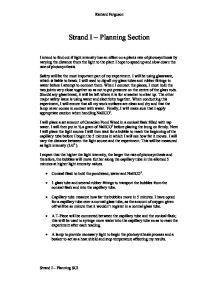 Strand I - Planning Section I intend to find out if light intensity has an effect on a plants rate of photosynthesis by varying the distance from the light to the plant I hope to speed up and slow down the rate of photosynthesis. Safety will be the most important part of my experiment. I will be using glassware, which is liable to break. I will need to dip all my glass tubes and rubber fittings in water before I attempt to connect them. When I connect the pieces, I must hold the two joints very close together so as not to put pressure on the centre of the glass rods. Should any glass break, it will be left where it is for a teacher to clear up. The other major safety issue is using water and electricity together. When conducting this experiment, I will ensure that all my work surfaces are clean and dry and that the lamp never comes in contact with water. Finally, I will make sure that I apply appropriate caution when handling NaHCO3. I will place a set amount of Canadian Pond Weed in a conical flask filled with tap water. I will then put in 1/2 a gram of NaHCO3 before placing the bung on firmly. Next I will place the light source I will then wait for a bubble to reach the beginning of the capillary tube before I begin the 5 minutes in which I will see how far it moves. I will vary the distance between the light source and the experiment. This will be measured as light intensity (1/d2 ). I expect that the higher the light intensity, the larger the rate of photosynthesis and therefore, the bubbles will move further along the capillary tube in the allotted 5 minutes at higher light intensity values. * Conical flask to hold the pondweed, water and NaHCO3. ...read more.

In the above table, I have used the units that I feel fit the results best, that is, cm for the distance from the lamp to the plant, mm for the distance the bubble moved and for the average and mm3 for the average bubble volume. I have put all my distance decimals to 1dp, as I don't think it would be practical to put them to any more as this wouldn't be shown on the graph anyway. However, my light intensity values are to many decimal places, this is due to the fact that these are such acute values and the difference between them wouldn't show up if they were written to 1dp. In order to ensure I had conducted a fair test and collected accurate results, I have made sure that none of the other variables affected my experiment in any way and that light was my varied factor. I used several tricks to do this; I placed a heat shield between the lamp and the conical flask so that temperature didn't affect the pondweed, I made sure that I didn't put an excessive amount of NaHCO3, as this would remove another limiting factor, and finally, I checked that our stop watch was accurate as this could have nullified our entire experiment. In the table of results, I have highlighted the result, which I think may not be accurate, and certainly isn't in keeping with the other results at that particular distance. I have also highlighted where it is used in the average, I have then given the average ignoring that result. I didn't get any other results that I felt were different enough to highlight. Strand III - Analysis Section I have looked at my results very carefully and, I can see that they follow my prediction quite closely. As I increased the light intensity value, the rate of photosynthesis increased. ...read more.

Light is absorbed by the pigments, raising their electrons to higher energy levels. When more light is applied, the electron energy levels are raised even higher. That is, until another variable becomes the limiting factor, which is what happens at 40 cm on the above graph. The energy is then transferred to a special form of chlorophyll A, called a reaction centre. Two photosystems, numbered I and II, are recognized. Light energy is first trapped by photosystem II, and the energized electrons are boosted to an electron receptor. They are replaced in photosystem II by electrons from water molecules, and oxygen is released. The energized electrons are passed along an electron transport chain to photosystem I, and energy-rich adenosine triphosphate, or ATP, is generated in the process. Light energy absorbed by photosystem I is then passed to its reaction centre, and energized electrons are boosted to its electron acceptor. They are passed by means of another transport chain to energize the coenzyme nicotinamide adenine dinucleotide phosphate, or NADP, resulting in its reduction to NADPH2. The electrons lost by photosystem I are replaced by those passed along the electron transport chain from photosystem II. The light reaction ends with the energy yield stored in the ATP and NADPH2 . My results showed that light intensity does affect the rate of photosynthesis. The also showed that any increase in light intensity will result in an increase in the rate of photosynthesis until another variable such as temperature or amount of carbon dioxide becomes the new limiting factor. If that were to be eliminated, then it would be possible to continue to increase light intensity and affect the rate of photosynthesis. The graph below shows the line of my prediction plotted against the line of my actual. This is good as it shows how close my prediction was. I expected the line to flatten out more towards the end; the actual effect was much less obvious than I was expecting. Series 1 = Actual Results Series 2 = Predicted Results Richard Ferguson Strand I - Planning SCI ...read more.