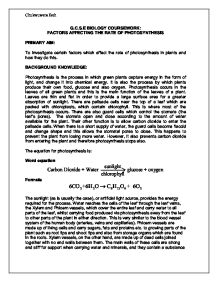 To investigate certain factors which affect the rate of photosynthesis in plants and how they do this.

G.C.S.E BIOLOGY COURSEWORK: FACTORS AFFECTING THE RATE OF PHOTOSYNTHESIS PRIMARY AIM: To investigate certain factors which affect the rate of photosynthesis in plants and how they do this. BACKGROUND KNOWLEDGE: Photosynthesis is the process in which green plants capture energy in the form of light, and change it into chemical energy. It is also the process by which plants produce their own food, glucose and also oxygen. Photosynthesis occurs in the leaves of all green plants and this is the main function of the leaves of a plant. Leaves are thin and flat in order to provide a large surface area for a greater absorption of sunlight. There are palisade cells near the top of a leaf which are packed with chloroplasts, which contain chlorophyll. This is where most of the photosynthesis occurs. There are also guard cells which control the stomata (the leaf's pores). The stomata open and close according to the amount of water available for the plant. Their other function is to allow carbon dioxide to enter the palisade cells. When there is a short supply of water, the guard cells become flaccid and change shape and this allows the stomatal pores to close. This happens to prevent the plant from losing more water. However, it also prevents carbon dioxide from entering the plant and therefore photosynthesis stops also. The equation for photosynthesis is: Word equation Formula The sunlight (as is usually the case), or artificial light source, provides the energy required for the process. Water reaches the cells of the leaf through the leaf veins, the Xylem and Phloem vessels, which cover the entire leaf and carry water to all parts of the leaf, whilst carrying food produced via photosynthesis away from the leaf to other parts of the plant in either direction. This is very similar to the blood vessel system of the human body (arteries, veins and capillaries). ...read more.

If the results were unreliable, then my results would not be entirely valid. To correct this, when I conduct my main investigation, I will place a transparent glass screen just in front of the lamp to absorb the majority of the emitted heat energy. The fact the screen is transparent means that it will still allow the light from the lamp to pass through to the elodea for photosynthesis, whilst still controlling the extra heat energy emitted making the results more reliable and thus enabling me to make a more reliable conclusion. Secondly, I did not have enough results to have a large enough range of data to make a reliable analysis of the relationship between the intensity of the light and the rate of photosynthesis. Therefore, in my main investigation I would have to extend my range of testing by testing more levels of light intensity (i.e. more distances) and also, testing each level of light intensity at least three times and taking an average of each test, to make sure my results are reliable enough to make a reliable conclusion. Finally, in the process of conducting the practical preliminary experiment, I found that the water temperature which I concluded was the optimum temperature, 20�C (based on the results of my simulation preliminary experiment) did not allow the allow elodea to photosynthesise as effectively in slightly more natural atmospheric conditions. I found that, instead, 26�C was the most effective temperature for the elodea in slightly more natural atmospheric conditions. Therefore, I would use 26�C as the optimum temperature for the water in my main investigation and keep this constant throughout the investigation. This concluded my preliminary investigations MAIN INVESTIGATION I now had sufficient knowledge of the apparatus needed for the investigation and enough experience to be able to make a fairly valid prediction for my main investigation. I decided to use the same method as my practical preliminary investigation (with a few alterations). ...read more.

One method would be to add constant amounts of sodium hydrogen carbonate () to the water at the beginning of each test. OTHER IMPROVEMENTS: There are other improvements which I could make to my method to make my results more reliable in a future investigation. One of these improvements would be to use a capillary tube instead of a test tube to measure the oxygen being produced. For similar future investigations, I would adapt the suggested improvements into my method where possible, to ensure that I have more reliable results and that I can reach fairer and more valid conclusions. However, I believe that, with the apparatus and conditions which I had available to me the investigation was conducted as fairly and sincerely as possible. With more advanced apparatus, the results of the experiment could have been even more reliable and I will note this fore future reference. DEVELOPING THE INVESTIGATION: This investigation is very flexible in the sense that there are many other variables which could be investigated and the experiment can be easily modified to accommodate this. One other similar variable which could be investigated would be the wavelength (or colour) of the light from the light source absorbed by the plant. The apparatus used would be very similar. The wavelength of the light has already been identified as an important variable as the chlorophyll of most plants tend to absorb the wavelengths of most colours of light except green (and some yellow) light, which is reflected back, giving plants the green appearance which we see. In another investigation, the relationship between the wavelength of the light and the rate of photosynthesis could be investigated by changing the colour of the bulbs in the lamp, and keeping all other variables constant (i.e. lamp distance, surface area, temperature, carbon dioxide volume and chlorophyll). The only problem with this experiment is that it is difficult to measure the wavelength of light with only basic equipment. We only have a basic idea of how to class colours. More advanced apparatus would be needed. Chukwuweta Ikeh ...read more.