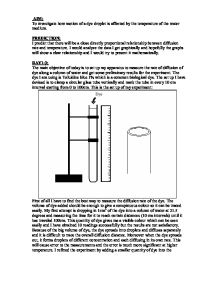 To investigate how motion of a dye droplet is affected by the temperature of the water medium.

AIM: To investigate how motion of a dye droplet is affected by the temperature of the water medium. PREDICTION: I predict that there will be a close directly proportional relationship between diffusion rate and temperature. I would analyze the data I get graphically and hopefully the graphs will show a clear relationship and I would try to present it mathematically. DAY1-3: The main objective of today is to set up my apparatus to measure the rate of diffusion of dye along a column of water and get some preliminary results for the experiment. The dye I am using is Toluidine blue 1% which is a common biological dye. The set up I have devised is to clamp a circular glass tube vertically and mark the tube in every 10 cm interval starting from 0 to 100cm. This is the set up of my experiment: First of all I have to find the best way to measure the diffusion rate of the dye. The volume of dye added should be enough to give a conspicuous colour so it can be traced easily. My first attempt is dropping in 1cm3 of the dye into a column of water at 21.5 degrees and measuring the time for it to reach certain distances (10 cm intervals) until it has traveled 100cm. This quantity of dye gives me a visible colour which can be seen easily and I have obtained 10 readings successfully but the results are not satisfactory. Because of the big volume of dye, the dye spreads into droplets and diffuses separately and it is difficult to trace the overall diffusion distance. Moreover when the dye spreads out, it forms droplets of different concentration and each diffusing in its own rate. This will cause error to the measurements and the error is much more significant at higher temperature. I refined the experiment by adding a smaller quantity of dye into the solution to prevent the spreading of the dye; however this shortens the distance the dye can be traced until it becomes invisible to naked eye. ...read more.

272 308.6667 15 393 - 398 301 364 16 453 - 467 348 422.6667 17 510 - - 386 - 18 581 - - 440 - 19 - - - 510 - 20 - - - - - Analysis: The colour of the blue dye is able to spread along the capillary tube of water is because of the mechanism of diffusion. Diffusion is a process by which molecules intermingle as a result of their random motions. We can consider a simple case where there are two containers with particle A and B. (1) In the beginning, there is a partition between both particles. The particles are in constant motion and collide with the partition frequently. (2) When the boundary between the two containers is removed, the particles are free to travel to both compartments. They will eventually mix with each other uniformly and this is a completely random process. Diffusion happens because of the high molecular velocities of the particles which are due to their internal energy. Internal energy is the energy associated with random movement of particles and it can be classified into potential and kinetic energies. Even in a cup of still water, all the water molecules are traveling at hundreds of meter per second. The second law of thermodynamics state that the total entropy in the universe can never decrease and this means system can only get more random with time. Entropy is the measure of how many ways molecules can be arranged in a system without altering the macroscopic properties. A good example of this is when a gas is compressed to half of its volume in a box and then released; it will attain the highest microscopic arrangement when all the gas molecules are spread evenly around the box. Diffusion of dye is a common case of second thermodynamics. When the dye is mixed with water, the dye molecules will be able to attain a lower energy state if they intermingle with the water molecules, thus increase the entropy. ...read more.

In my experiment I have used the smallest tube as possible however there was still a certain extent of uneven diffusion happening. Using a capillary tube with a smaller diameter can certainly improve the accuracy of the results. If the investigation is continued, I would make more measurements at a wider range of temperatures and more repeats will be done for each temperature. I would also introduce a data logging system to trace the displacement of the dye with a colorimeter instead of using naked eye to do the measurements. Because when the dye has traveled for a certain distance, its colour will get so diluted that it is difficult to trace by eye so a colorimeter will give us a more accurate trace of the motion of the dye. I would also use a different dye to investigate the effect of density on the motion of the dye droplet. CONCLUSIONS: I have successfully completed my aim of investigating how a dye travels along a water column and discovered the effect of temperature on its motion. The results have proved that my prediction that the dye will travel faster if the temperature is increased doesn't seem to be correct. I have discovered the velocity of the Toluidine blue dye droplet at higher temperature, however, decreases in a faster rate as the dye travels along the column than the lower temperature ones. I have developed a hypothesis trying to explain this phenomenon and I think it is the concentration gradient at the bottom of the droplet and the temperature which are counteracting each other; if the temperature is higher, the more dispersed the dye molecules will be and the less concentrated the bottom of the dye droplet will be. In order to consolidate my hypothesis I believe more experiments have to be conducted to obtain a wider range of data and more repeats. I also suspect that this will only be the case around a certain range of temperature. So if the temperature exceeds this range, it may not necessarily follow this trend as the temperature may completely override the local concentration gradient effect. ...read more.