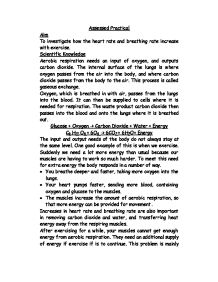 To investigate how the heart rate and breathing rate increase with exercise.Scientific KnowledgeAerobic respiration needs an input of oxygen, and outputs carbon dioxide

Assessed Practical Aim To investigate how the heart rate and breathing rate increase with exercise. Scientific Knowledge Aerobic respiration needs an input of oxygen, and outputs carbon dioxide. The internal surface of the lungs is where oxygen passes from the air into the body, and where carbon dioxide passes from the body to the air. This process is called gaseous exchange. Oxygen, which is breathed in with air, passes from the lungs into the blood. It can then be supplied to cells where it is needed for respiration. The waste product carbon dioxide then passes into the blood and onto the lungs where it is breathed out. Glucose + Oxygen -> Carbon Dioxide + Water + Energy C6 H12 O6 + 6O6 -> 6CO2 + 6H2O+ Energy The input and output needs of the body do not always stay at the same level. One good example of this is when we exercise. Suddenly we need a lot more energy than usual because our muscles are having to work so much harder. To meet this need for extra energy the body responds in a number of way. * You breathe deeper and faster, taking more oxygen into the lungs. * Your heart pumps faster, sending more blood, containing oxygen and glucose to the muscles. * The muscles increase the amount of aerobic respiration, so that more energy can be provided for movement. Increases in heart rate and breathing rate are also important in removing carbon dioxide and water, and transferring heat energy away from the respiring muscles. After exercising for a while, your muscles cannot get enough energy from aerobic respiration. They need an additional supply of energy if exercise if is to continue. This problem is mainly the result of not being able to get the oxygen to the muscles quickly. Under these conditions the muscle will continue to respire aerobically (with oxygen) ...read more.

When we sweat we need to control the amount of water we transfer to the skin. The human body is two-thirds water. We gain water from the food we eat as well as the liquids that we drink. In addition, the body gains some water from certain chemical reactions- such as respiration- where water is one of the main waste products. There are a number of ways the body loses water. The average person, under normal conditions, loses about three litres of water a day in various ways: * In liquid waste (urine) from the kidney * In solid waste (faeces) from the gut * By breathing out water vapour from the lungs * By sweating from the skin Water balance is important because cells of the body only work properly if there is the right amount of water present. If we lost just about a tenth of our body water, we would die from dehydration. If you didn't take in any water at all, this would happen in about ten days but a lot faster in hot dry conditions. Long before that time you would be very uncomfortable. The feeling of thirst would become unbearable. Keeping the amount of water constant in the blood, and therefore in the whole body, is another important example of homeostasis: Water gain = Water loss Just as body temperature is controlled by the hypothalamus, so is the water content of the blood. The hypothalamus contains receptors that monitor the level of water in the blood. If the body is suffering from a lack of water, the receptors are stimulated and pass nerve impulses to the pituitary gland which is right next to the hypothalamus. This releases a hormone called antidiuretic hormone (ADH). This passes through the bloodstream to the kidney where it causes more water to be reabsorbed from the tubes back into the blood. As a result of this, the urine will contain less water, it will be more concentrated, darker yellow and smaller in amount. ...read more.

Glucose + Oxygen -> Carbon Dioxide + Water + Energy Heart rate increases because the breathing rate has increased. It allows the increasing levels of carbon dioxide to be removed out of the muscles and to the lungs where gaseous exchange takes place as quickly as possible. The heart is told to increase by the part of the brain called the When we exercise our muscles increase the amount of work they are doing causing us to breathe deeper and faster, which takes more oxygen into the lungs. To compensate for the increase in carbon dioxide levels the heart pumps faster, sending more blood, containing oxygen and glucose to the muscles and removing water and carbon dioxide. This allows the muscles to increase the amount of aerobic respiration, so that more energy can be provided for movement. This supports my prediction as I predicted that as exercise increases so will heart rate and breathing rate. Evaluation I feel my results were quite accurate but I think I could have improved the accuracy of my results if I had been able to use a watch which have measured my pulse. This would have also allowed me to measure it quicker so that I could move on and perhaps try another exercise to see if it affects breathing rate and heart rate in the same way that step ups affect them. I feel that doing the exercises like I did e.g. doing 20 step ups every minute and then waiting for my heart rate and breathing rate to back to normal before doing 30 steps per minute would have affected my glucose levels. This might have affected the levels at which my body would have worked. My results support my conclusion well. It shows a relationship and it matches my prediction. If I could do the experiment again I would try different exercises to see if that would affect the heart rate and breathing rate as well as the step-ups did. ?? ?? ?? ?? ...read more.