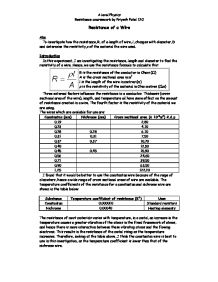 To investigate how the resistance, R, of a length of wire, l, changes with diameter, D and determine the resistivity of the material the wire used.

To investigate how the resistance, R, of a length of wire, l,changes with diameter, D and determine the resistivity ρ of the material the wire used.

In this experiment, I am investigating the resistance, length and diameter to find the resistivity of a wire. Hence, we use the resistance formula to calculate this:

Three external factors influence the resistance in a conductor. Thickness (cross-sectional area of the wire), length, and temperature all have some effect on the amount of resistance created in a wire. The fourth factor is the resistivity of the material we are using.

The wires which are available for use are:

I found that it would be better to use the constantan wire because of the range of diameters, hence a wide range of cross sectional areas of wire are available. The temperature coefficients of the resistance for a constantan and nichrome wire are shown in the table below:

If I double the cross sectional area of the wire, then I will cut the resistance by half. This is because a wide wire would allow a high current to pass through it, while it would be more difficult for the current to flow in a narrow wire due to it’s restriction to a high rate of flow.The resistance would be higher for a thin wire compared to that of a thick wire because of the increase in collisions of electrons and the metal ions.

I will make my experiment as accurate as I can by using accurate measuring apparatus, such as the micrometer, a digital multi-meter instead of the traditional analogue voltmeter, as the scale divisions are much smaller on the digital meter than on the analogue meters.

I will try to make sure there are no kinks in the wires as this increases the thickness of the wire. I shall measure the diameter from a number of places on the wire so that I can see that the wire is of one diameter on the length.

I will have to take account of possible errors, such as the zero error in equipment, and other random and systematic errors, which can occur.

I will try to avoid making the parallax errors, (the error which occurs when the eye is not placed directly opposite a scale when a reading is being taken). This can be made on reading off a ruler. The reading errors (the error due to the guess work involved in taking a reading from a scale when reading lies between the scale divisions, and the zero error (the error which occurs when a measuring instrument does not indicate zero when it should)

So if I were to find the uncertainty in the value for the resistivity, I would have to use the following formula: -

However, as the gradient on the graph was equal to the resistivity x length, I have to add the error in length to find the possible error in the overall experiment.

Now, I have to calculate the error from this percentage uncertainty. You do this by calculating 3.29% of the gradient of the line of best fit.

Overall, on looking at the actual resistivity, from “Physics For You”, I believe that my results were accurate, but taking the errors into account there is a possible range in my resistivity being between: 46.76 x 10-8 Ωm – 50.44 x 10-8 Ωm. This tells me that the resulting error is a major contribution to the resistivity, as this error can have a huge effect on the resistivity of the constantan wire I used. However, on doing this experiment again, I would know what to look out for, i.e. specific errors, change of equipment, i.e. the steel rule and digital meters.

This is a well structured report.
1. There is a running commentary through this investigation that should be removed.
2. The report needs to have a 'Variables' section that contains information is that spread throughout the report.
3. The report is incomplete and needs to be finished.
****