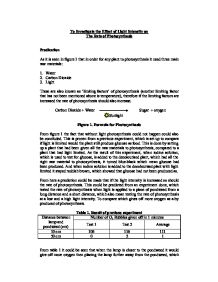 To Investigate the Effect of Light Intensity on The Rate of Photosynthesis Predication As it is seen in figure 1 that in order for any plant to photosynthesis it need three main raw materials: 1. Water 2. Carbon Dioxide 3. Light These are also known as 'limiting factors' of photosynthesis (another limiting factor that has not been mentioned above is temperature), therefore if the limiting factors are increased the rate of photosynthesis should also increase. Carbon Dioxide + Water Sugar + oxygen Sunlight Figure 1. Formula for Photosynthesis From figure 1 the fact that without light photosynthesis could not happen could also be concluded. This is proven from a previous experiment, which is set up to compare if light is limited would the plant still produce glucose as food. This is done by setting up a plant that had been given all the raw materials to photosynthesis, compared to a plant that had light limited. ...read more.

Chloroplast is made of a green substance called Chlorophyll, chlorophyll is the most important substance if photosynthesis is going to occur. When visible light from a light source shines on leaves chlorophyll absorbs the energy in the light and uses it to combine the carbon dioxide and water to produce glucose. Oxygen is also produced as a by - produced. From this it could be seen that light plays an important part in photosynthesis so if this factor is increased the rate of photosynthesis should also increase. So now an experiment is going to be undertaken to see if this is truly the case. Plan of Method Diagram Apparatus Below is a list of apparatus needed to do the experiment. * 200 ml beaker * table lamp * a meter ruler * a 5 cm pondweed * a stop clock * a straw * thermometer * paper clip * Pondweed Method 1. Darken the room so that the light from windows does not vary and upset the results. ...read more.