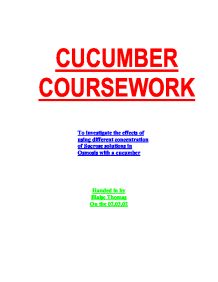 *Planning* Introduction Throughout this experiment I shall be investigating how different solution concentrations can affect osmosis. For this I have chosen to use sucrose solution, and cucumbers. Diffusion is the movement of a substance through a fluid (i.e. liquid or gas). In a solution, diffusion happens when there is a higher concentration of a substance in one part of the solution than in another. It spreads until the concentration is the same throughout the solution. Osmosis is the diffusion of water from an area of low concentration (i.e. high concentration of water) to an area of high concentration through a selectively permeable membrane. In both plant and animal cells water can pass through but in the latter there is no cell wall to keep the cell from bursting. So if the water concentration is higher outside the cell, then water will pass until the cell bursts. (Unless a stable point is reached before). However in plant cells, the cell wall, which is entirely permeable and very strong, can keep the cell from bursting. Turgor and plasmolysis. These are the two different "states" in which a cell can be left if it's concentration within is not the same as outside. (Note, animal cells can go flaccid but not turgid, they burst instead). ...read more.

The best solution (which is what I did) is to give the cucumber slice a quick shake and dab it on filter paper. The experiment could be improved by trying a wider range of solutions (not just sucrose) and at different concentrations. The tests should be repeated as many times as possible and a longer time should be used to let the slice absorb or eject water. This should be done because it would eliminate any extreme end results and give better averages. I think that my results were accurate enough to reach a firm conclusion which is probably correct as it would agree quite strongly with my background information. Further work could include researching what chemicals are in solution inside the cell and whether using different solutions would effect osmosis. Also the cucumber slices could be tested at different stages of development to test for a specific time period during which the starch in the sap cells is developing. Also another test could be to do exactly this same experiment after having left the slices of cucumber for different periods of time in sunlight and or shade to see how the concentrations inside the inner sap vacuole would change as the cells were dying. The tests would be almost identical to this one with perhaps a few changes in their preparation. ...read more.