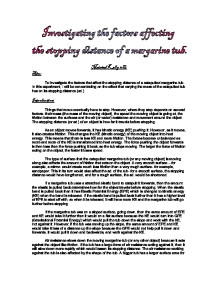 Things that move eventually have to stop. However, where they stop depends on several factors- their mass (the mass of the moving object), the speed the moving object is going at, the friction between the surfaces and the air (or water) resistance and movement around the object. The stopping distance (or sd.) of an object is how far it travels before stopping.

As an object moves forwards, it has kinetic energy (KE) pushing it. However, as it moves, it also creates friction. This changes the KE (kinetic energy) of the moving object into heat energy. This means that there is less KE and more friction. The forces become unbalanced as more and more of the KE is transformed into heat energy. The force pushing the object forwards is then less than the force pushing it back, so the tub stops moving. The larger the force of friction acting on the object, the faster it loses speed.

The type of surface that the catapulted margarine tub (or any moving object) is moving along also affects the amount of friction that acts on the object. A very smooth surface – for example, a mirror- would create much less friction than a very rough surface- for example, sandpaper. This in its turn would also affect the sd. of the tub- for a smooth surface, the stopping distance would have lengthened, and for a rough surface, the sd. would be shortened.

That experiment also showed me that as the mass of the trolley increased, the starting speed decreased. If the starting speed is lower, then there is less Kinetic Energy that the friction has to turn into heat energy, meaning that the trolley (or in my case, the tub) stops more quickly. Therefore, this information supports my prediction.

On this program, I could change the height of a ramp that the trolley was on, and investigate the stopping distances for different heights; from two to nine centimetres, moving up one centimetre every time. Changing the angle of the ramp meant that the starting speed changed as well, because according to the height and slant of the ramp, the trolley would have more or less GPE (more if the ramp was higher, less if the ramp was lower). Once again, because the program had built-in error software, I took three sets of results for each height of the ramp and found the average. When I plotted this on a graph, the line of best fit was a straight line (see results table B and Chart C) although a few points were scattered slightly off of the line, the overall scatter was very close to the line. This shows that ss. is directly proportional to sd, meaning that as the starting speed (ss) increases, the stopping distance (sd) increases at the same rate; if the ss. doubles, then the sd will double, and so forth.

The results of these preliminary experiments support my prediction.

Although I attached the elastic band to chair legs and even asked someone to sit on the chair to keep it steady whilst doing the experiment, it is possible that the chair could have moved, which would affect not only the elastic bands position but also where the margarine tub was catapulted from. If the chair legs moved forwards and the margarine tub started by being slightly in front of the line it was supposed to start on this would affect the results because if it travelled (for example) one metre but had started from two centimetres over the mark, then the results would have recorded it as having gone one point two metres. This problem could be overcome if the elastic band was attached to a more solid, immovable object- for example, table legs.

It would have been better if the tub could have been propelled over a more regular surface, as the floor I used had dents and slight bumps in it. If the margarine tub had hit one of these, it would not only have created more friction and slowed the tub down, but also could have affected the tubs direction of movement and given it a slight diagonal slant so that although it moved just as far, it did so slightly sideways, and therefore the distance it travelled to the side would not have been measured.

The report shows a good level of research and detail.
1. The introduction is very well researched and shows a good understanding of the science surrounding this investigation.
2. The fair testing section also shows a good level of detail.
3. References need to be included and colour changes removed.
4. The analysis section is good. However it is also brief and does not attempt to explain the results.
5. The evaluation shows some good practice but there is a large amount of information repeated from earlier sections.
**** (4 stars)