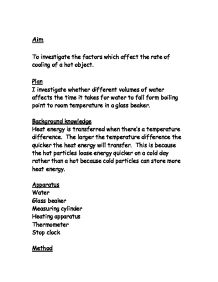 To investigate the factors which affect the rate of cooling of a hot object.

Aim To investigate the factors which affect the rate of cooling of a hot object. Plan I investigate whether different volumes of water affects the time it takes for water to fall form boiling point to room temperature in a glass beaker. Background knowledge Heat energy is transferred when there's a temperature difference. The larger the temperature difference the quicker the heat energy will transfer. This is because the hot particles loose energy quicker on a cold day rather than a hot because cold particles can store more heat energy. Apparatus Water Glass beaker Measuring cylinder Heating apparatus Thermometer Stop clock Method I will use varying amounts of water; 50ml, 100ml, 150ml, 200ml, 250ml heated in a glass beaker. I am using volumes of water that go up in fifty's so that my experiment is a fair test and I have a good range of results. I will then heat the water to boiling point and take the temperature with a thermometer every 20 seconds for five minutes. ...read more.

This is because a small volume of water will have fewer particles in. As there is less energy it will take less time for the energy to escape and therefore less time for it to cool down. As the molecules on the surface of the water cool fast, convection can take place quicker. I can make this prediction using my background knowledge. Analysis The evidence I have collected shows that the smaller the volume of water, the quicker the water cools. I have plotted the results I have collected on my graph. The points form a curve; this is called a cooling curve. I can work out how fast the water cooled in the first 20 seconds by working out the gradient. You work out the gradient by drawing a line from 100?c to the temperature at twenty seconds. You then extend the line so it is in line with 100 seconds and draw a horizontal line from the end of this line to the vertical axis. You then count how many ?c there is from where the horizontal line connects to the vertical axis to the 100?c point and divide the number by 100. ...read more.

****
A reasonably good account of the investigation although more detail in the method would be helpful. There is no discussion of surface area to volume ratios.