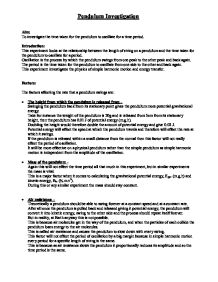 To investigate the time taken for the pendulum to oscillate for a time period.

To investigate the time taken for the pendulum to oscillate for a time period.

This experiment looks at the relationship between the length of string on a pendulum and the time taken for the pendulum to oscillate for a period.

Oscillation is the process by which the pendulum swings from one peak to the other peak and back again.

The period is the time taken for the pendulum to oscillate from one side to the other and back again.

This experiment investigates the physics of simple harmonic motion and energy transfer.

The factors affecting the rate that a pendulum swings are:

Take for instance the weight of the pendulum is 20g and is released from 5cm from its stationary height, then the pendulum has 0.01 J of potential energy (m.g.h).

Doubling the height would therefore double the amount of potential energy and give 0.02 J.

Potential energy will affect the speed at which the pendulum travels and therefore will effect the rate at which it swings.

If the pendulum is released within a small distance from the normal then this factor will not really effect the period of oscillation.

It will be more effective on a physical pendulum rather than the simple pendulum as simple harmonic motion is independent from the amplitude of the oscillation.

Again this will not effect the time period all that much in this experiment, but in similar experiments the mass is vital.

Take for instance the angle that the pendulum is released from is 10° to the normal.

Therefore the total angle would be 20° because when the pendulum is released, it will pass the normal and go to about 10° to the other side.

If we were to calculate the distance the pendulum has to travel considering the length of the string is 20cm this is how we would do it:

This same formula also displays a direct link between the time period for an oscillation and the length of string.

2π will always be a constant because it is just a value of a specific number.

“g” is also a constant because it represents the gravitational force of the earth, so unless one was to do the experiment elsewhere the value would always be the same (9.8m/s2).

If you take the two constants out of the equation because their only job is to make the “numbers add up”, you are left with:

When the pendulum is pulled to its starting point, it gains potential energy.

This is because it has moved to a higher position and so gravity is giving it extra energy.

If the length of string is about 20cm and a 20g pendulum is moved to 10° to one side we can calculate the potential energy and its velocity as follows:

2 = l. This therefore proves the hypothesis correct i.e. there is a direct correlation between t2 and l.  L will naturally increase t because the larger the l the larger the arc of displacement or amplitude because not only will it have more of a fractional circumference but more potential energy as the height difference will increase in proportion. 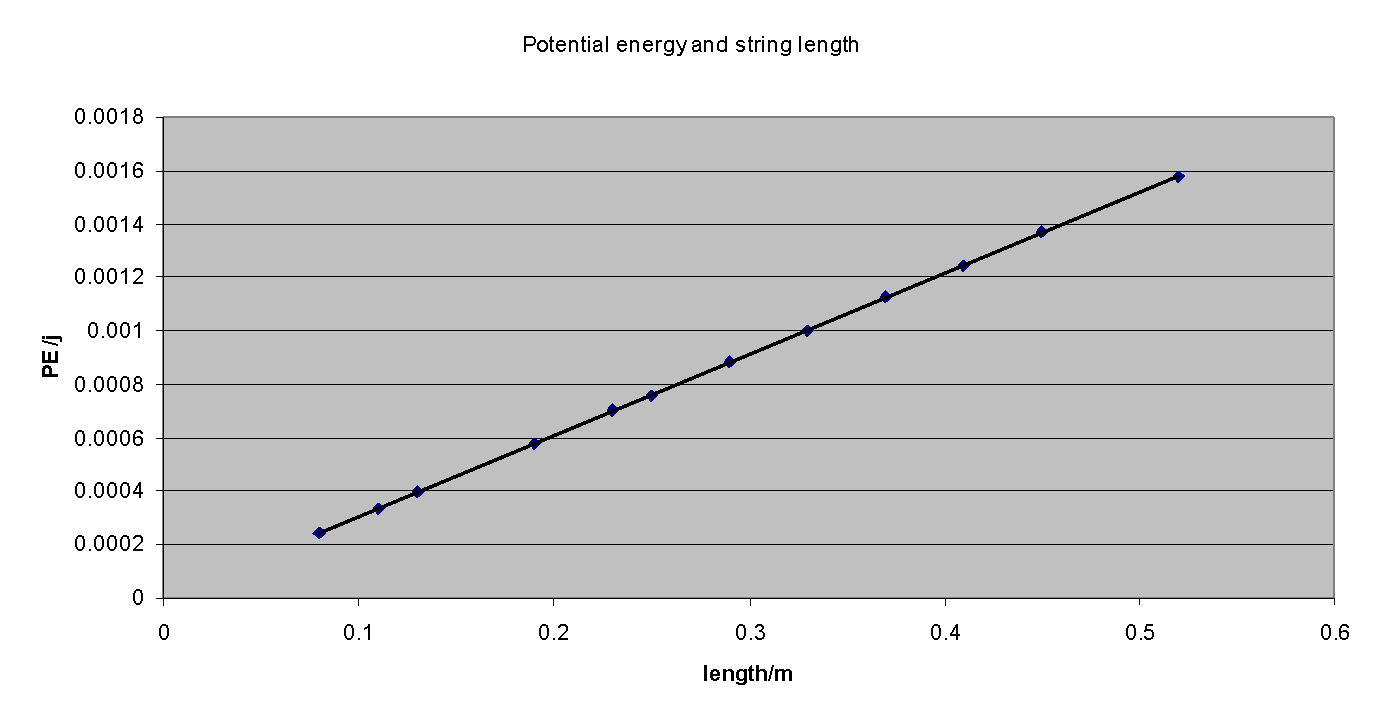 This chart shows that there is a directly proportionate correlation between the length of string and the potential energy that the pendulum gains. It proves the last point in the previous paragraph “l will naturally increase t because the larger the l the larger the arc of displacement or amplitude because not only does it have more of a fractional circumference but more potential energy as the height difference will increase in proportion.” However this will not effect the rate of oscillation much, as bigger amplitude also means bigger velocity and so the rate will stay pretty much the same.

The experiment was far from perfect, mostly because we were unable to obtain the planned readings, as we could not get the string length to exactly what we wanted. As a result the results were uneven. What we could have done was to set the apparatus as below:

The accuracy of our results could have been enhanced if we had repeated experiments and taken the average of each reading. The 5% stopwatch error margin could not be avoided and positioning the pendulum was a little tricky to start with when measuring the degrees.

Apart from that our results were very accurate with only a 3-4% error margin. Also the results clearly showed the directly proportional relationships without any anomalous results. I believe there is strong evidence in this investigation to support the conclusions and the hypothesis.