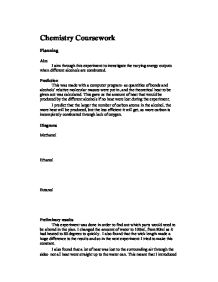 To investigate the varying energy outputs when different alcohols are combusted

Chemistry Coursework Planning Aim I aim through this experiment to investigate the varying energy outputs when different alcohols are combusted. Prediction This was made with a computer program- as quantities of bonds and alcohols' relative molecular masses were put in, and the theoretical heat to be given out was calculated. This gave us the amount of heat that would be produced by the different alcohols if no heat were lost during the experiment. I predict that the larger the number of carbon atoms in the alcohol, the more heat will be produced, but the less efficient it will get, as more carbon is incompletely combusted through lack of oxygen. Diagrams Methanol Ethanol Butanol Preliminary results This experiment was done in order to find out which parts would need to be altered in the plan. I changed the amount of water to 100ml, from 80ml as it had heated to 80 degrees to quickly. I also found that the wick length made a huge difference to the results and so in the next experiment I tried to make this constant. I also found that a lot of heat was lost to the surrounding air through the sides- not all heat went straight up to the water can. ...read more.

My results will probably show that the alcohol has taken longer to heat the water (with more alcohol therefore required), as heat loss to the air etc will be incurred. Because of this, I will try to stop any heat loss through the equipment to the air. I will also have to stop any variables other than the temperature of the water from changing between the alcohols eg: the wick length. The variables which I will try to control during the experiment are as follows: wick length, mass of the water, evaporation of alcohol after heating is completed- before the alcohol is weighed, temperature of the water before and after the experiment, distance between flame and can, and the can- each is different in weight etc. The incomplete burning of the carbon is a factor that I cannot control. The variables that will change are: the length of time that the alcohols burn for and type of alcohol. I will use the alcohols: Methanol, ethanol and Butanol. The predicted heat given out by each of the alcohols is shown on a later page. Equipment Method Measure out- using a measuring cylinder for accuracy, 100ml of water and put this in the metal can. Attempt to keep the wick lengths approximately the same (1/2 an inch). ...read more.

The flame size was also varied by size of the wick and by the type of alcohol. This made it difficult to decide whether to move the beaker up or down as the flame size could have been because of the alcohol- in which case the test would be fair, OR by the wick, in which case a different flame size would make the results unreliable. Evaporation of the water as the temperature rose to 80 degrees would also mean that as the water increased temperature, the speed that it increased temperature would also increase as there would be less water to heat. Human error would also have made a difference to the results. Even if the alcohol was stopped from burning at the right time, and no alcohol was lost due to evaporation, measurements can be different if read from a scale seen from above of below eg on the measuring cylinder. If more alcohols were used, such as Propanol, this would also give more evidence to the conclusions that we are lead to by the 3 alcohols. Another alteration that I would make is to have an oxygen supply to the alcohol flame. This would make the combustion of the alcohol much more complete and so the black smoke would not be produced. I would also increase the measures to prevent hat loss by surrounding the flame more completely and using insulators to hold the can etc instead of conductors of metal. ...read more.