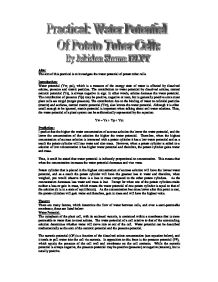 to investigate the water potential of potato tuber cells.

Only one variant was kept: - the concentration. However, when it came to removing the potato cylinders from the boiling tubes some took longer to remove then others as it was a slightly difficult task which may have also caused the potato cylinders to be squeezed slightly, resulting in the loss of water and mass. The only real problem within this experiment was the apparatus. Within my apparatus and method I stated "Using a cork borer and razor blade, prepare six potato cylinders, each about 1mm in diameter and 50mm long" however, due to inefficient equipment I changed the measurements of my potato cylinders too, length of 20mm and a diameter of 7mm. If I was to perform this investigation again, the only thing I would change is the timing, because I had to hurry slightly, thus, may perhaps cause inaccurate results. In addition to a greater time period, more readings may be taken to make my experiment fairer. For further research or evidence of osmosis taken place refer to the onion percentage plasmolysis investigation. This is simply where small thin strips of onion are placed under a microscope; where their cells are counted. Then the onion strips are placed within different sucrose concentrations (different moralities). After a set period of time, the onion strips are removed and once again placed under a microscope. Next you are required to count the number of cells plasmolysed. This experiment is made possible due to osmosis. If you put a plant cell in a solution (e.g. a concentrated sucrose solution) that has a lower (more negative) water potential than the cell's cytoplasm and vacuole, water leaves the cell by osmosis. The vacuole shrinks and eventually the protoplast (the living part of the cell) becomes detached from the cell wall. The point at which the protoplast is just about to become detached is called incipient plasmolysis. When it has become detached, the cell is said to be plasmolysed. Therefore, from this happening you are able to count the cells within this onion strip that has been plasmolysed, hence, proving the principles of osmosis. By Jaikishan Sharma 12LVY ...read more.