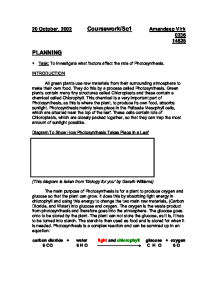 To investigate what factors affect the rate of Photosynthesis.

20 October, 2002 Coursework/Sc1 Amandeep Virk 0236 14625 PLANNING * Task: To investigate what factors affect the rate of Photosynthesis. INTRODUCTION All green plants use raw materials from their surrounding atmosphere to make their own food. They do this by a process called Photosynthesis. Green plants contain many tiny structures called Chloroplasts and these contain a chemical called Chlorophyll. This chemical is a very important part of Photosynthesis, as this is where the plant, to produce its own food, absorbs sunlight. Photosynthesis mainly takes place in the Palisade Mesophyll cells, which are situated near the top of the leaf. These cells contain lots of Chloroplasts, which are closely packed together, so that they can trap the most amount of sunlight possible. Diagram To Show How Photosynthesis Takes Place In a Leaf (This diagram is taken from 'Biology for you' by Gareth Williams) The main purpose of Photosynthesis is for a plant to produce oxygen and glucose so that the plant can grow. It does this by absorbing light energy in chlorophyll and using this energy to change the two main raw materials, (Carbon Dioxide, and Water) into glucose and oxygen. ...read more.

4. On the ceramic tile, using the scalpel cut of 6 cms of elodea. Be careful and keep fingers out of the way because the scalpel is very sharp. 5. Attach the elodea onto the inside of the funnel using a paper clip. 6. Make sure your funnel fits inside of the large beaker when you collect your equipment and chemicals. 7. Then place the funnel into the large beaker. 8. Fill the large beaker with 650 mls of water, so the top of your funnel is covered. 9. To keep the upside down burette in place, use a clamp, boss and clamp stand and set up as shown in diagram. 10. Fill the burette with water to the top so there will be no trapped air bubbles to interfere with the results. 11. Place your thumb tightly onto the bottom of the burette to make sure no water falls out and place the burette onto the top of funnel but make sure no air bubbles become trapped in the burette. So you must make sure the bottom of the burette is in the water before you let go of it. ...read more.

Sometimes the lamp was closer to than elodea than it should have been and then other times it was too far from the experiment. These mistakes could have been avoided if I had used the ruler more carefully and made one spot where the lamp would go and only used one position in which the lamp was. I was also hard to get the lamp on the same level as the experiment. I could use a different source of light that would be more at the level of the experiment such as a torch. During the experiment I made observations and wrote down what I could see. I was not receiving very good results so I counted the amount of oxygen bubbles that had collected on the elodea. These were not very accurate observations as they were quite general and they would only tell me very little about how light intensity affects photosynthesis. In the future, I would like to study the effects of colored light on photosynthesis. I would like to do an experiment that would tell me about which colour light produced the most oxygen during photosynthesis. The two factors, light intensity and coloured light, may have similar results because they are both using light to increase photosynthesis. ...read more.