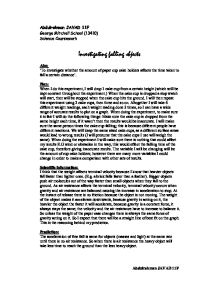 'To investigate whether the amount of paper cup cake holders affects the time taken to fall a certain distance'.

‘To investigate whether the amount of paper cup cake holders affects the time taken to fall a certain distance’.

When I do this experiment, I will drop 1 cake cup from a certain height (which will be kept constant throughout the experiment.) When the cake cup is dropped a stop watch will start, then will be stopped when the cake cup hits the ground. I will then repeat this experiment using 2 cake cups, then three and so on. Altogether I will take 6 different weight readings, each weight reading done 3 times, so I can have a wide range of accurate results to plot on a graph.When doing the experiment, to make sure it is fair I will do the following things: Make sure the cake cup is dropped from the same height each time, if it wasn’t then the results would be inaccurate. I will make sure the same person times the cake cup falling; this is because different people have different reactions. We will keep the same sized cake cups, as a different surface areas would lead to wrong results (I will presume that the cake cups I use will weigh the same).

The range of variables for this experiment is:

Number of cup cake holders-I chose this one because it is probably the most simple and easy to set up yet has the best outcomes and most accurate results as patterns and graphs can be made with ease.

Conditions-This change would mean testing just one cup cake holder in various conditions and making valid observations and reasoning to why and which conditions affect the rate of terminal velocity.

The way it which it is dropped-If this variable was used then the cup cake holder could be dropped sideways therefore decreasing the surface area meaning the air resistance will be less and as a consequence the terminal velocity changing.

Preliminary work:
I used one ruler to take the preliminary reading before setting up my main experiment. This was completed before the main experiment by taking 6 cup cake holders (the maximum amount of cups I will use in the experiment), and timing how long they took to reach the ground from different heights. (In these preliminary results I changed the height to 1m so I could find out clearly about my prediction). The table of results that I got for my preliminary work:

The main error I think was delayed reaction times. When the cup/s was dropped, it would have taken the timer some time to start the stopwatch after it had passed the beginning of the timing point. Also if different people were timing they would obviously have different reaction times therefore affecting the results. If I did this experiment again I would have the same person each time, also I have the person timing standing at a point where they could clearly see when the cake cup passed. Also the stopwatch could only be measured to an accuracy of a 10th of a second.Another problem that occurred was that when the cake cup fall though the air there was some movement. The cup tended to sway from side to side which meant there would not be a constant area,(meaning the surface are constantly changing) which would obviously effect our results as there would be extra movement from side to side. If I were to do the experiment again, it would be hard to eliminate this error. The only way this could be slightly improved would be to ensure the best conditions possible to do the experiment in (a wind and draft free place.)After I had plotted my graph I found that there was one anomalous result, and this could have been because of any of the errors above.