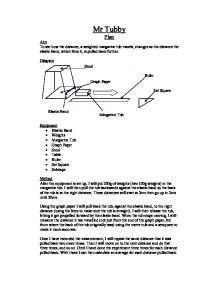 To see how the distance, a weighted margarine tub travels, changes as the distance the elastic band, which fires it, is pulled back further.

To see how the distance, a weighted margarine tub travels, changes as the distance the elastic band, which fires it, is pulled back further.

After the equipment is set up, I will put 200g of weights (two 100g weights) in the margarine tub. I will then pull the tub backwards against the elastic band so the back of the tub is at the right distance. These distances will start at 2cm then go up in 2cm until 20cm.

Using the graph paper I will pull back the tub, against the elastic band, to the right distance (using the lines to make sure the tub is straight). I will then release the tub, letting it get propelled forward by the elastic band. When the tub stops moving, I will measure the distance it has travelled (not just from the end of the graph paper, but from where the back of the tub originally was) using the metre rule and a setsquare to make it more accurate.

My graph shows me that as the elastic band was pulled back further and further, the further the tub travelled.

This can clearly been seen by the way the results curve upwards steeper and steeper. Meaning that the each time the tub was pulled back further, it didn’t just increase in distance the same amount each time, otherwise it would of produced a straight diagonal line going up. Instead it gains in distance from the previous result by a bit more each distance pulled back, creating the upwards curve on the graph.

In my prediction I thought that:

As the force on the tub increases, the speed will increase quicker, meaning the distance the tub travels further each time, increases more.

After doing the experiment I now know this is correct and that the predicted shape of the graph I drew, is also correct.

To make the investigation a fair test, I will not change these things:

The only thing that I will change is the amount of weights in the margarine tub.

The things that could affect my experiment are:

To try and control these things I will try to put the tub in the same position on the elastic band and keep the experiment on the same desk. Although this doesn’t control the things very well, it is the best that can be done in the classroom.

I expect that as the weight inside the tub increases, the distance the tub travels will get less and less.

I think that this will happen because the friction between the table and the bottom of the tub will increase, as the mass of the tub increases. As this friction increases it means that to move the tub as far as the previous go, the tub will have to be pulled back further against the elastic band. But as the distance pulled back is kept the same, it means the tub wont travel as far as the previous go.

So the graph of results should look something like this: